Adelaide’s designers and restaurant and bar owners have become bolder and more ambitious in their work – and the world is taking notice. 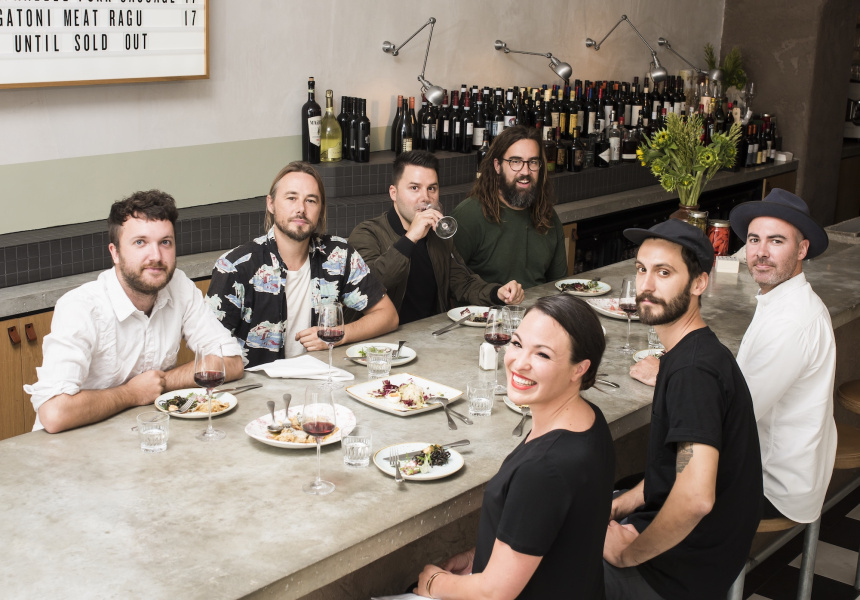 For a small bar, Pink Moon Saloon had a big year. In 2016 it took top honours at the Restaurant & Bar Design awards in London. It was named national Bar Of The Year at the Gourmet Traveller Restaurant Awards, and scored a first at the Eat Drink Design Awards when it became the only venue to take out both Best Design and Best Identity Design.

If Pink Moon Saloon was an outlier, a one-off, then design aficionados could head down Leigh Street, look around, order a drink and relax in the knowledge they had ticked the only box necessary to experience the peak of Adelaide’s bar and hospitality scene. But it isn’t, and they can’t.

Pink Moon is one of many Adelaide bars and restaurants raising eyebrows and expectations with its synthesis of dining and design. Antica Pizzeria e Cucina, Sunny’s Pizza, Maybe Mae, Osteria Oggi and a host of others are pushing boundaries, creating a culture of encouragement for South Australian designers and bar and restaurant owners to become bolder and more ambitious in their work together. Clearly, it’s being noticed.

“Food is only a very small part of what makes up a good eating experience. Space is sometimes more important – and service. They're the energy of a place.” We’re speaking with Andy Nowell, an owner of Sunny’s Pizza, a bar known as much for revitalising a rarely visited West End block as for the excellent product served from of its wood-fired oven. Sunny’s was designed by Studio -Gram, the local firm also behind Osteria Oggi, Abbots & Kinney and St Hugo.

In large part, it is the work of Adelaide designers such as Studio -Gram that gives restaurateurs such as Nowell the confidence to make statements that would have been laughed at a decade ago. Studio -Gram’s founders, Graham Charbonneau and Dave Bickmore, are emblematic of the new breed of Adelaide design, practitioners who are involved in all stages of a hospitality project. Often they’ll come on board before a location has even been found, and work until after the doors have opened.

“The best jobs are the ones when you have a strong, trustworthy relationship with the client,” says graphic designer Carlo Jensen, whose work won Pink Moon Saloon its identity design award. Working with the venue’s owners and young architect Matiya Marovich, Jensen says he was free to experiment with new ways of adding value to the business. “The more layers you can create, the longer people will stay,” he says. Visiting Pink Moon, you can imagine that even guests who aren’t conscious of the design consistency running from the timber cabinetry through to the printed coasters would find themselves magnetically attracted to the space.

But increasingly, punters are paying attention. Well-executed design connects patrons with a story. It cocoons them in an immersive narrative woven through every aspect of a business’s offering. That proprietors are engaging creatives earlier in the process than ever before speaks to an acknowledgment that good design contributes to a business in a myriad of ways. From how a venue looks and is marketed, to profitability and workflow, to the customer’s overall experience. When executed well it helps define the connection between patron and proprietor.

“The role of the architect used to be to lay out the space and pick some finishes,” says Marovich. “It wasn’t related to branding or the vibe of the venue.” No longer. But that’s not to say other critical elements of a bar or restaurant are sacrificed at the altar of design.

James Hillier, of Africola, Golden Boy and Botanic Bar, firmly believes efficiency and function still come first. “The machinery of food delivery – speed, quality and cleanliness – sometimes get left behind,” he says. He’s wary of design obsession where the tail wags the dog, resulting in what he calls “glorified theme parks”.

Successful venues understand how and where different elements intersect. “When efficiencies are created in the delivery of food, front of house gains a confidence and pride from good things coming fast. [Customers’] impatience is the great poison of the room,” says Hillier.

Design not only influences how customers engage with a venue, but also how they discover it. Increasingly, first contact comes via social media – long before the doors are thrown open.

“The Instagram scroll leaves little time to capture someone’s attention,” says Studio -Gram’s Dave Bickmore. “The images created by design become intrinsic to the way a venue can connect, both with its current and potential clientele.”

Marovich finds it impossible not to consider social media. He designs his venues and selects finishes with their online presence in mind, even looking for materials that will photograph well. “It’s not the most important thing, but you have to think about it,” he says. “What’s this bench-top going to look like under a flatlay?”

Genesin Studio’s Ryan Genesin (Antica Pizzeria e Cucina) finds that these days he rarely has to prompt operators to consider social media. Over the past decade it has just become another part of the process. “Ten years ago, no one took photos of their plates,” he says.

Pink Moon Saloon is the most ambitious project raised since Adelaide’s small-bars license was introduced in 2013. It stands in a former bin area off Leigh Street that’s just 3.5-metres wide. Owners Josh Baker, Dana Whyte, Crispian Fielke, Marshall King and Matthew Standen had the site, a basic concept (essentially a laneway bar with a retractable roof) and the romantic notion of being in the outdoors.

Sans-Arc Studio’s Matiya Marovich recognised the potential and responded with his own, more ambitious brief to erect “a mountain hut in the city”. Sans-Arc employed traditional practices and sourced timber from the surrounding habitat (“Because in the forests of Norway, there’s no Bunnings”). Besser blocks were chosen because in SA “they’re the equivalent of local stone”.

Inside, the wood-fire stove and open-air courtyard play to this notion of a wilderness escape. Carlo Jensen dressed the space and designed graphics to assist customers in believing in the little fairytale.

Kardachi had a food concept – a wood grill and damn-fine burgers – and Kneebone let the space(s) dictate her design approach. The pair was in constant conversation to ensure they understood what the other aspired to deliver. With three separate areas to manage, continuity was paramount.

For Maybe Mae, Kneebone dove into the underground bar scene, travelling to New York for inspiration. Art Deco is a mainstay of the city’s classic cocktail bars, and the size and shape of the basement back home leant itself perfectly to this style. The bar is licensed for only a small number of drinkers, so dim lighting and a “secret” entrance were designed to nurture a sense of intimacy.

The tiled tunnel connecting Peel Street and Leigh Street is a reference to New York’s subway – a theme echoed throughout the two-storey restaurant – and an indication to patrons about what’s to come. “I wanted to create an engaging space, not just a concrete walkthrough,” Kneebone says.

The subway aesthetic continues up the stairs at burger and hot dog joint Bread and Bone. Kneebone wanted to highlight the building’s existing features – the exposed stone and rafters – while introducing complimentary natural and industrial materials she had seen in metro stations.

When you cook with fire, sometimes you get burned. When flames tore through Africola in 2016, business partners James Hillier and James Brown seized the opportunity to build something even better from the ashes. “It was perfect timing,” says Brown. “We’d always had the plan to flip it.”

The refit was a joint effort. Hillier considered it a cleansing and a chance to correct the original concept. He was keen to declutter and reduce friction between the space and service. “The first menu was confused with the space – and what we were supposed to be serving.” He says the second fit-out complements the menu.

Hillier reallocated floor space by culling around 50 seats, expanding the kitchen and increasing productivity. It paid off. Even with fewer tables. “We probably seat 50 more people every night,” Hillier says.

Brown’s design is laced with personality and warmth, and he says he’ll continually remodel Africola with works from his and Hillier’s personal collections to maintain a personal touch. “Two of my favourite photographers of all time are African,” says Brown “so it just made sense to use them.”

“All the moments that work in the room – the ones that pop – are James Brown moments,” says Hillier. “He’s a great sourcer of things,” (to the point of acquiring the nickname “James Browse”). “Retooling a restaurant, a theatre show – anything – is successful one time in 200. This is one of the things I’m most proud of.”

The team played to the building’s strengths and overlaid aspects of a traditional Italian dining experience − in architecture and cuisine.

"Simon wanted to use the natural daylight offered by the existing saw-tooth roof, and locate the kitchen on the mezzanine, to put it on show – the rest was up to us, really," says Dave Bickmore. "We looked to the piazzas of Italy and the important role they play in Italian eating, drinking [and] meeting culture."

The firm managed all the architecture, interior decor and art direction for signage and styling. Once the brief was written, a troop of specialist contractors was assembled to realise their vision. Tristan Kerr designed custom graphics, Katia Carletti crafted a range of bespoke ceramics and Emma Sadie Thomson filled out the arbour with greenery. Osteria Oggi was listed by CNN as one of the world's 10 best restaurants of 2016.

Righteously riotous, Sunny’s Pizza is the bastard child of an audacious bunch of hospitality heads and the design firm that pulled it all together. Partners Andy Nowell, Josh Dolman, Ash Wilson, Rob Denisoff and Josh Cook each had ideas about how the venue would eventuate, and engaged Studio -Gram (which is also a share-holder) before they even had a venue. When they discovered Solomon Street, it was a perfect fit.

It made sense to bring in Peculiar Familia’s Carlo Jensen on graphics and to assist with interior styling, after Nowell and Jensen’s “50-or-so drunken conversations about the place”. Jensen took his cues from the myriad inspirations of the venue: “New York pizza parlours, West Coast modernism, disco classico and a good splash of Italian Futurism,” he says.

With so many voices the project could easily have run off the rails. Careful management, open collaboration and clear aesthetic principals were the keys to its success. Everything was taken into consideration, right down to the custom-printed crockery. It was Jensen who suggested the distinctive oval plates. “I was at the Jerusalem [SheshkababHouse] – probably the daggiest venue in Adelaide – and they were slapping down these old plates,” he says. The style resonated with the ’70s vibe at Sunny’s, and had logistical benefits, too (staff could fit more of them on a table). “There was a fair bit of pushback when I suggested it, but when they arrived, everyone lost their shit.”

Genesin’s brief for creating a CBD sister store to Hyde Park’s Antica Pizzeria e Cucina centred around representing its owner’s heritage in a city-savvy venue. References to Anthony Crea’s hometown of Naples are presented through a filter of contemporary textures and modern dining conventions.

Instead of resorting to cliché, he meticulously examined every measurement and every aspect of the cooking and dining spaces, ensuring harmony between back and front of house.

Crea was chasing the nostalgic atmosphere of eating at his nonna’s house. A chef’s table was proposed, but the restaurant’s family-friendly environment meant this posed safety concerns. Instead, glass panels maintain an important connection between diners and chefs.

Antica is a venue that unquestionably understands its location, its demographic, its future and pride in the family’s lineage.