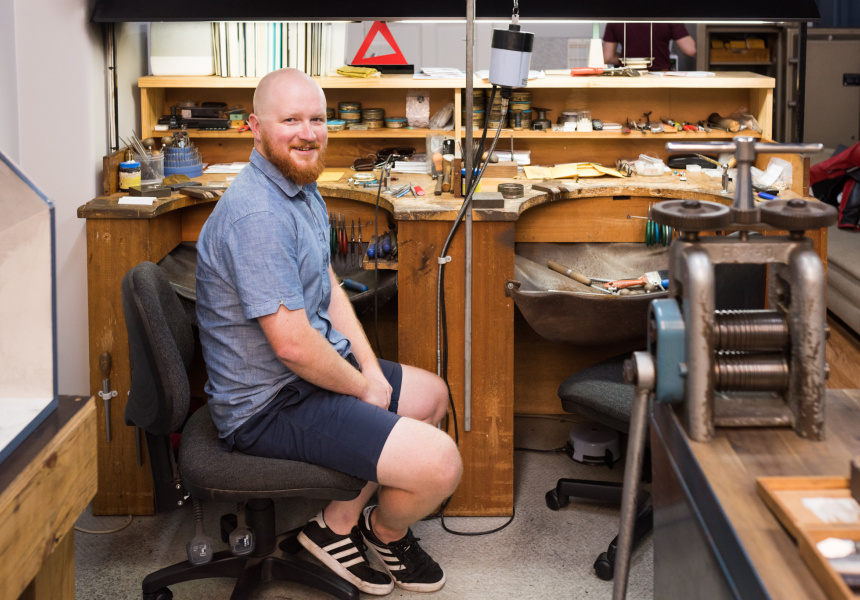 Adelaide jeweller Tim Parker opened his studio in the heritage-listed Epworth Building in January 2016. In little over two years he has carved out a niche in the local market, becoming a go-to for custom engagement rings – mostly through word of mouth.

Parker has been able to generate enough work to keep him at the bench five-and-a-half days a week. His small and stylish space doubles as a workshop and consultation area. A well-loved couch is the first port of call for would-be customers. For those in the market for a surprise engagement ring, it can be an overwhelming experience; Parker wants to cut through that.

“They look on websites and confuse themselves with terminology,” he says. “I just want to [let] them [know] I’m on their side and here to help, not take their money and bang out a ring.”

His process begins with a conversation and a gander through his step-by-step “Engagement Guide”. Increasingly, couples are making the decision together, which “ … takes the stress out of it for them and me,” Parker says. It streamlines the process and takes out the guesswork.

In addition to meeting with clients, Parker's working week consists of running errands and keeping up with the odd tasks that come with maintaining a one-man business. “It’s like spinning plates,” he says, as he ticks off his to-do list on his fingers. “Some days I wish I had a personal assistant … so I can just sit down and make.”

His process is completely manual, with no casting or sneaky shortcuts. Each ring begins with a nugget of pure gold. “I alloy and melt it down and roll it out on these bad boys,” he says, pointing to the old-school mills inherited from his father's workshop.

Parker’s dad John, an award-winning jeweller himself, recently retired after more than 40 years in the job. The bond has proved hard to break, though. He joins Parker at the bench one or two days a week as his “personal stone setter”.

John's mastery of his craft has rubbed off on his son, although Parker claims “every jeweller has their own style. “You could get five jewellers to make the same piece and they would all look different. It’s the little touches that each person puts into their work that make them different.”

He cites the Art Deco period as a major influence on his own work, finding inspiration in the relationship between straight lines and curves and materials with a difference. But he stops short of describing things in too much detail: “Hopefully my pieces speak for themselves.”

Parker is currently in the works of developing a limited series of five “off-the-shelf” engagement rings – ready-made, no-fuss pieces for customers after something simple. When asked when the range would be made available online, he doesn’t mince his words: “When I sort my shit out and have more time.” You can’t rush art.