Inside the workspace of Adelaide’s guitar master Steve Salvi. 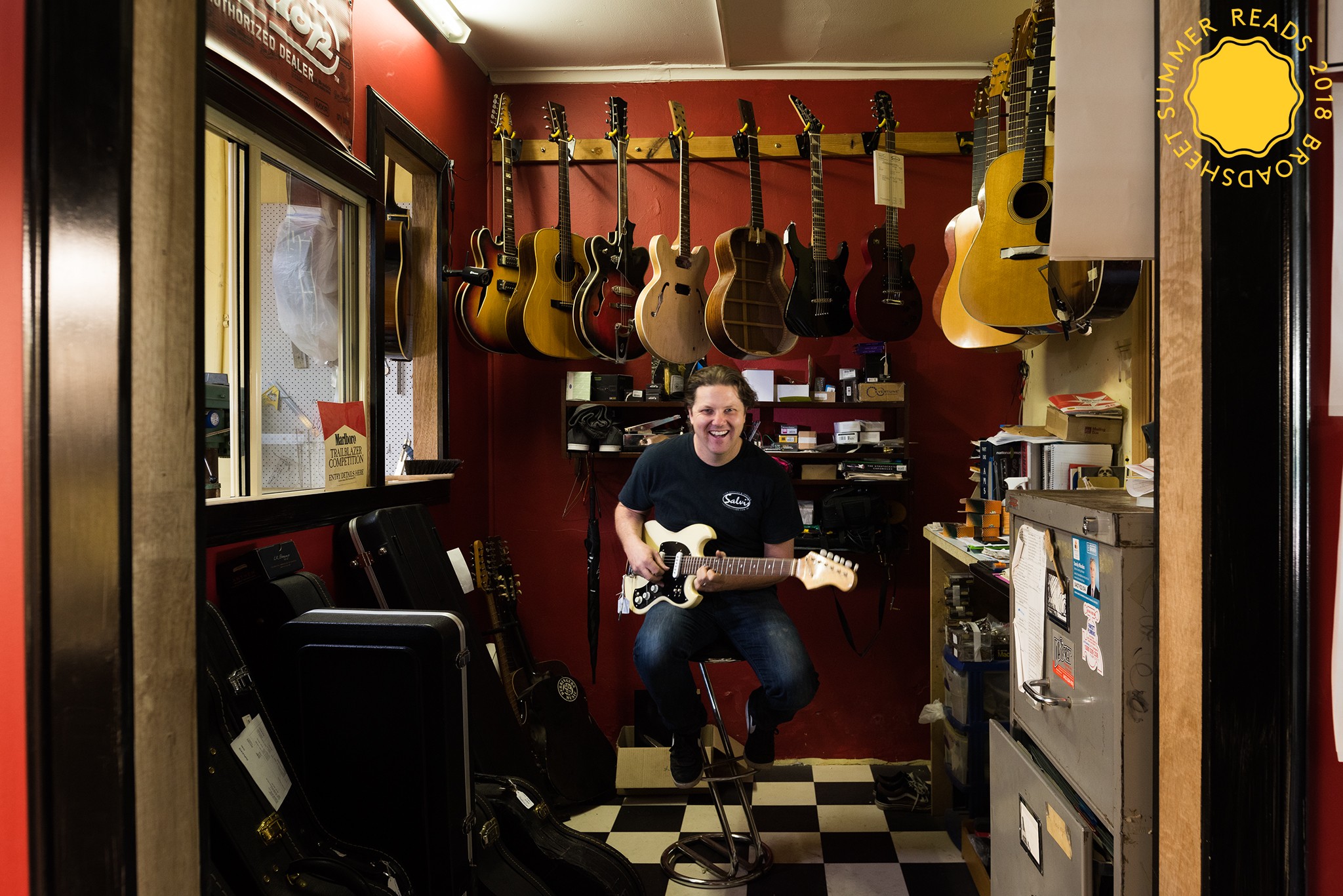 When Broadsheet visits Steve Salvi in his Thebarton workshop, Europe’s The Final Countdown blares from a set of small desktop speakers. Salvi flashes a confused glance at his computer screen: “My son must have put this on there”. The playlist soon returns to the front bar blues-rock you’d hear most nights of the week at Salvi’s favourite pub, The Grace Emily Hotel.

Salvi is a luthier whose custom guitars have taken centre stage with artists like Deniz Tek from Radio Birdman and Tracer’s Michael Brown. Heather Frahn touts her own Salvi special; a one-off acoustic-bass-bouzouki-hybrid with four bass strings and two octave pairs in the treble. Not something you can pick off the rack at your local music shop.

Salvi’s Fine Guitars isn’t that. The boxy shopfront and narrow, airy workshop feel somewhere between an artist’s studio and an antique shop. In the back, guitars – and parts of guitars – occupy almost every horizontal surface. Vices hold instruments in various states of repair, relics hang from the walls, and cases are wedged tightly into racks overhead. Someone’s pride and joy – a cherry red Gibson Les Paul, the neck snapped clean off – languishes against a bin filled with offcuts. It’s the victim of a previously botched repair job (not one of Salvi’s), waiting patiently to be resurrected by his hand.

Salvi gives us the tour, pointing out projects he’s midway through and naming the different types of timber laying in racks. Timber is something a luthier knows well. Salvi can recognise an Australian blackwood tree by its leaves. There’s one growing in his backyard that he planted with his son (he of the ’80s power-pop persuasion). Salvi explains there’s no difference between “ash” and so-called “swamp ash” (despite what lumberyard guys will tell you): “You say you want swamp ash and they double the price. I just say ‘ash’ and then ask for the density I need.”

He lists a few more varieties, their particulars, how and why each is used. It’s tradition that guides his selections – mostly – but “sometimes it’s good to mess with wood,” he says. There’s unpredictability in experimenting with new materials, and “you want to be excited”.

He’s currently prototyping a new model made from paulownia – “the fastest growing tree in the world”. It’s incredibly light (somewhere between cedar and balsa wood) but strong, and not very resonant. He picks up an antique banjo – in pieces on another bench – and shows where he’s added carbon fibre to restore the shape.

Then he says, “Wood doesn’t have a sound,” which feels like an about-face. “It absorbs frequencies, and it’s not super efficient.” What he means is that, when listening to a guitar, what you’re hearing – the sonic range of its output and the clarity – is what’s not being absorbed by the instrument. “It’s like light,” he explains. “I mean, when I look at you, am I really seeing you?” Who knew a conversation about lumber could go so deep, so fast?

As a player, Salvi is guided by each instrument he comes into contact with. “I say, ‘what does it sound like?’ and then I pick the music to suit the guitar.” Easy for someone who’s been playing since age 11.

“My first guitar was a white Sakai,” Salvi recalls. It cost his mother $55. He took to it instantly and before long was transcribing complicated licks by folk guitarist Leo Kottke.

Salvi seems capable of playing almost any style, should he find inspiration in it. These days he’s into blues and Americana-tinged rock, but he’ll occasionally dabble in classical forms. Noodling on a Sakai identical to the one from his childhood, he demonstrates a new mode he’s exploring, used commonly in Flamenco. “Flamenco is one of the last bastions of non-ironic shredding,” he tells us, without a hint of sarcasm. Most would probably never consider the two alike – the furious scurrying of fingers over frets made famous by Spanish guitarists, and the spotlight-stealing solos of Megadeth, Pantera or Steve Vai – but he’s right.

In the ’80s, Salvi spent time co-operating a recording studio in the Adelaide Hills. He recorded a bunch of local bands including acid-jazz outfit Crisp (fronted by a little-known vocalist going simply by ‘Sia’). It was disassembled when Salvi felt he’d spent enough time “on the wrong side of the glass”. He’s much happier on stage beside his bandmates, playing a vintage pedal steel guitar (or tinkering with it between gigs).

When not on stage with bands The Best Extras and Matt Ward And The Rising Sons, Salvi has to choose indulgent moments carefully. “I wait until the kids are in bed, then I go play in the bathroom,” he says, explaining that he enjoys both the privacy and acoustics offered by the smallest room. “I just sit on the edge of the bath and shred.”

Salvi took his first instrument-building course at the age of 17. He then travelled to London to work in esteemed acoustic dealership Denmark Street, where he handled hundreds of guitars from all the major makers, learning everything he could about their various forms, compositions and craftsmanship. After returning home, he was granted The Winston Churchill Fellowship, travelling to the US to study under “guitar builder and jig maker extraordinaire” Charles Fox.

Today, every one of Salvi’s acoustic guitars is constructed entirely by hand. Each takes weeks of tooling and refining to sculpt a distinctive sound. But, “With electrics, you want every one to be exactly the same,” he says. Salvi achieves this consistency by using design software and a Computer Numerical Control (CNC) machine that routes and shapes each body. He still builds necks by hand though, for a touch of romance. “You want to pick one up and go ‘oh yeah, that's a good one’,” he says.

So, of all the guitars he’s built over the years, which is his favourite? “I think I’m supposed to say ‘the next one’,” he says, smiling.