Explore this multi-storey, multi-disciplinary art factory and meet its next wave of artists. 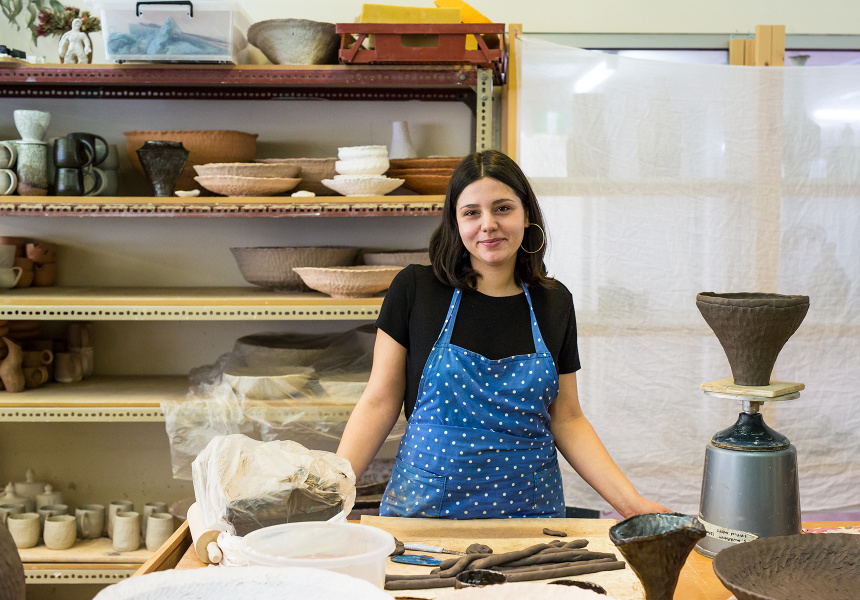 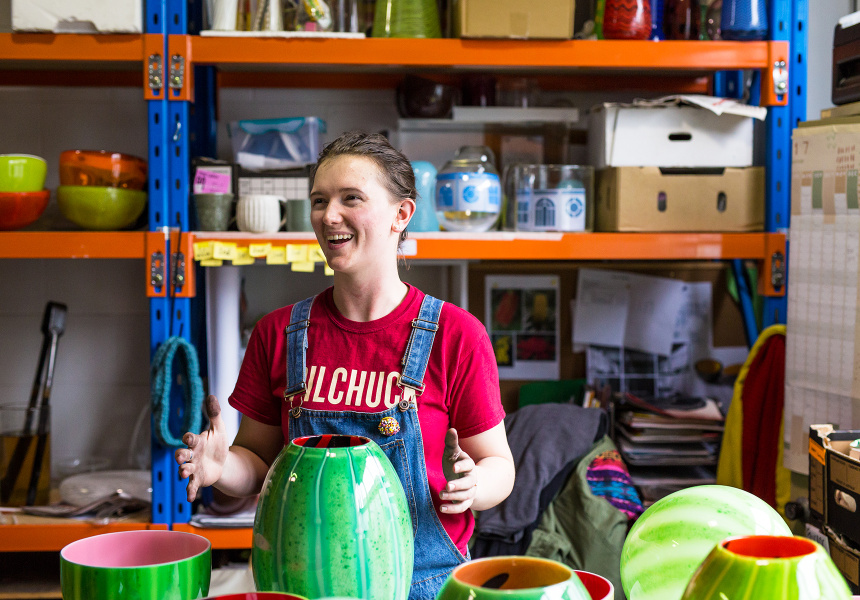 It’s not a stretch to call the Jam Factory an Adelaide institution. But few know the three-storey building beyond its public galleries and schmick retail shop.

The west end building also comprises four large, shared studios for artists working in ceramics, furniture, glass and metal. Broadsheet was recently given a tour of the institute, where we met some of its most exciting emerging designers and makers.

On the ground floor is the glass blowing workshop. Here, members of the public can watch artists at work from a raised viewing platform. It’s immediately transfixing; a crowded floor surrounded by screaming furnaces. It’s difficult to reconcile the delicate works displayed in the showroom with such a ferocious scene.

Amid the clamour, glass associate Emma Young is turning out a hand-blown glass watermelon – part of a collection she has in development. Chatting as she works, she slides a bowl-shaped piece of glass on the end of a metal rod into a glowing oven. “That’s called a glory hole,” she tells us. “Like, actually.” When the piece is finished, it’s placed in a kiln to cool overnight, and Young leads us into her studio. It’s full of glass watermelons. “I’m thinking of maybe naming them after my family members,” she says.

Young’s practice is steeped in nostalgia and the iconography of (a South Aussie) childhood. Her catalogue includes glass versions of the Balfours frog cake, Haigh’s freckles and Menz FruChocs, as well as a series of colourful glasses based on The Wiggles. “I like people straight away recognising what it’s referencing,” she says. “It’s really fun.”

Her watermelon series is a slight departure from this, as she tries sharing more intimate stories – like the rules of eating fruit at her nana’s house. “The kids are not allowed to eat watermelon inside,” she says. “We’d have to go out on the back lawn. Only the adults were allowed inside.” Like her cousins and siblings, the watermelons come in all different shapes and sizes.

Personal narratives have always been central to Young’s craft. “I’m really close with my family. Here [at Jam Factory] we almost have a second family. We work so closely together.”

The Jam Factory’s intensive Two Year Associate Program attracts makers at various stages of their careers, from across the globe. Associates study under creative directors (celebrated artists in their own right) to develop their personal practice, and create products under the Jam Factory brand in return for studio time. They still pay an attendance fee, but also receive commissions for work sold through the Jam Factory’s two stores. It’s a perfect self-contained ecosystem that benefits all parties.

“Jam Factory is a valuable place to prototype because you don’t have to pay the $300 for four hours [studio hire],” Young says. “You can experiment and try crazy things … I have a lot of freedom in that way.”

The associate program is also an opportunity to test the viability of her commercial ideas. “We are able to put our work in the shop and see how customers react,” Young says.

Up the central staircase on level two are the furniture studios. The smell of freshly cut timber provides relief from the heady fumes of gas burning below.

We find furniture associate James Howe at his bench, lacing Danish cord around a white steel frame to create a bench seat. It’s a process he adapted from traditional methods and has been using since producing his first pieces. “It’s kind of nice to have something that you do that no-one else is doing,” he says. “I enjoy it, I like the aesthetic, I love the material and I think it gives my practice a point of difference. It helps to carve out a little niche.”

Almost everything Howe does is self-taught. “I’ve got no background in furniture,” he admits. “I was a journalist. I wrote for magazines and took photos as well.”

He switched to his current vocation after becoming obsessed with Danish designer Børge Mogensen. “I’d go online everyday and I’d look up photos of his house,” Howe says. “I’d find other designers – like Donald Judd and Hans Wegner – and I’d look at their work and their homes too.”

Howe’s wife suggested he try his hand at furniture making. “At first I was like, ‘you’re joking I can’t make or design furniture. It’s a dumb idea.’ And she said, ‘It can’t be worse than what’s already on the market’.” He applied the same enthusiasm he’d channelled into stalking famous furniture makers, and – inspired by his newborn baby – turned it to designing a change table and a bassinet-and-stand. One of those pieces won the 2015 Etsy Design Award. “I needed that external validation because I really didn’t know if it was good, or if it was shit or mediocre or whatever,” says Howe. “I got into The Jam basically off those nursery pieces.”

His next self-imposed challenge is to singlehandedly construct a cabinet for Jam Factory’s end-of-year show. “I have no great wish to be a furniture maker, but I want to know how to do the basics,” he says. “I always want to have some kind of making as part of my practice.

“I’ve found something that I love and I think about it all the time, rather than trying to forget it – like I did when I was writing.”

On the top floor are Jam Factory’s ceramics, jewellery and metalwork studios. Connie Augoustinos greets us from behind her potters’ wheel, flanked by several half-finished pots.

Despite approaching the end of her two years at Jam Factory, Augoustinos tells us she feels no pressure to have passed particular markers, like those imposed by more formal art schools. There’s no grading process at Jam Factory. Students are free to explore their chosen discipline in any manner, seeking guidance from their field’s creative director as and when they need it. “I’m really playing with shape and seeing what I like,” says Augoustinos.

The ceramics studio ticks over at lower revs than glass and furniture. “I find hand-building to be really meditative,” Augoustinos says. “It’s slow and intuitive.” Unlike some associates, Augoustinos chooses not to work on the Jam Factory production line. “We have the choice of throwing piece work for the studio, but I don’t really do that. I help with studio upkeep and cleaning and loading kilns.”

That’s not to say she doesn't see the value in creating work for retail. “Right now I’m working on more sculptural work, but eventually I want to build up a line of servingware,” she says.

“I want to create a really surreal experience with my products. The shape and the design and the fact that you can see finger marks … Tableware today is all quite sleek.”

Once her associate program is over, Augoustinos plans to remain at Jam Factory, in their private studios. “It’s great spending time around other established makers,” she says. “I don’t think I’m done here. It’s really amazing to have all these facilities at our fingertips.”

Augoustinos speaks with total commitment and passion for her craft – a sentiment echoed throughout the establishment. “Today everyone’s in this crazy fast-paced world. It’s nice being surrounded by people who want to slow down and make,” she says.

“For me, starting ceramics taught me not to be so anxious about everything. It’s okay if things take time. I guess there are lots of little life lessons in what I do.”

Emma Young, James Howe and Connie Augoustinos will exhibit works alongside other second year associates at Generate 2017. The exhibition will run from December 8 to February 11. 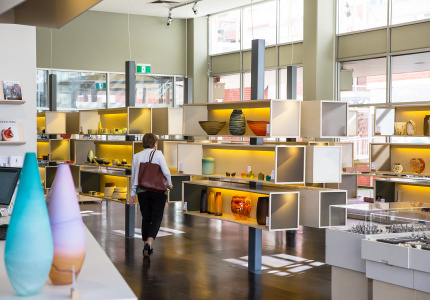