Progression Tattoo Goes Back to Work

His shop was attacked in June, but tattoo artist Matt Deverson is sticking to his guns. 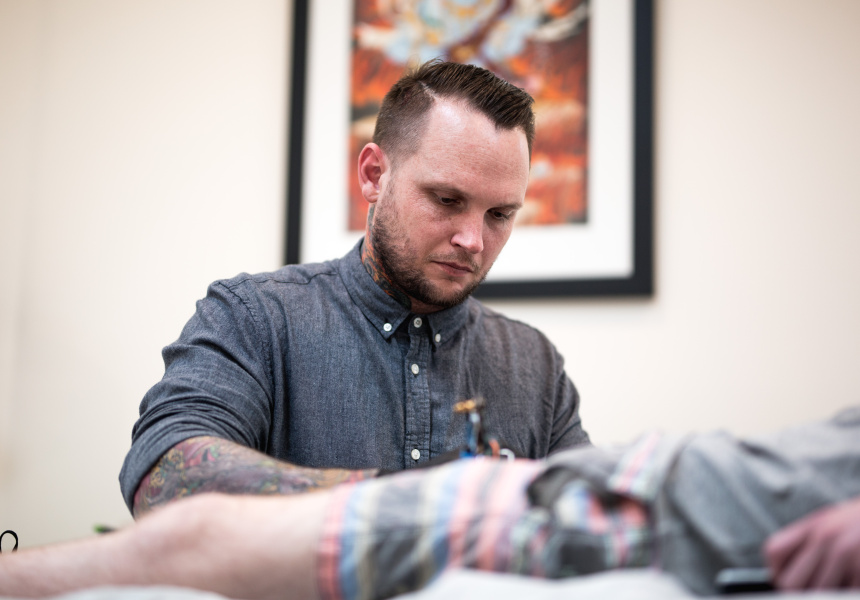 After a hectic month-and-a-half, Progression Tattoo owner Matt Deverson is back on the tools in a new, albeit temporary, studio.

The motive behind the attack on Progression is unclear, but if the intent was to intimidate, it failed. Instead, it provoked a wave of support from the community.

Within minutes of news reports going live, Deverson began receiving calls and texts from fellow artists expressing their condolences. Many offered to loan him equipment and inks, and some opened their studios for him and his staff to continue their practice.

“It’s crazy the amount of stuff we received from all of our friends’ shops – and not just from Australia and Adelaide – worldwide as well,” Deverson tells Broadsheet.

Following the incident, the small Progression team dispersed across Adelaide, pulling guest spots at 1891, House of Daggers and Unseen Tattoo. “We were lucky to be able to shuffle into their shops and keep tattooing,” Deverson says. “We can’t make a living without doing that.”

Deverson and his staff have now bunked in with Hyde Park neighbour and long-time friend Paul Dare at Dare Hair salon. “We’re still pretty much at the same spot, just a door down,” he says. “It’s nice … we still see the same faces every day.”

Progression Tattoo had operated from the same Hyde Park premises (which Deverson owns with his wife, Sam) for eight years. The studio is part of the community. “People see it as a family-run business. It’s just, tattoos are our business,” he says.

Sam tells Broadsheet they plan to resume operations at 274 Unley Road, “within a year”. “The full scope of what needs to be done has not been fully identified but the damage is extensive,” she says. “But we have been told at least eight to twelve months.”

The strike in June followed a spate of attacks in Angle Vale, Old Reynella and Aldinga Beach targeting tattoo studios in 2015. Broadsheet spoke to a number of Adelaide tattooists – some who asked not to be named – who suggested firebombing had been used to threaten, or restrict the operations of, studios that did not share affiliations with certain organisations.

The state government responded with the Tattoo Industry Control Act 2015, aimed at eliminating organised crime from the tattoo industry. There was strong opposition to the law, with many claiming it painted the industry with too broad a brushstroke. Many opposed the insinuation that anyone from a declared organisation (such as the numerous motorcycle clubs listed in the Act), who was also involved in tattooing, was likely a criminal.

In 2017, tattoos are so commonplace it’s almost incomprehensible to think artists still suffer outdated misconceptions about their work. But for some it’s still a constant battle. Many property owners remain wary of doing business with tattooists.

“If I go to lease a space they ask what I want to use it for – and if I say ‘art studio’ it's ok, but if I say ‘tattoo studio’ they don't want to accept the application,” says local tattoo artist Caitlin Thomas, who has worked around the country. “In some councils they put tattooing [legislation] in the same box as ‘Adult Services’ – which is for strip clubs and brothels.”

Like Deverson, Thomas considers herself, foremost, an artist. Sure, her medium has a complicated history, but she’s hopeful that will evolve. “It's a way to have a steady income from art that doesn't mean I have to sit in front of a computer all day.”

“I don't think what’s happened [at Progression Tattoo] is a step backwards,” another interviewee – who asked not to be named – tells us. “I think it brings those who are positively trying to move the industry forward closer together, and we are more united than ever to do so.”

Buoyed by the response from colleagues, Deverson is feeling positive about the future. “People in the general tattooing community think, ‘that happened to good people’,” he says. “It doesn’t matter if it’s me or [someone else], they want to help us and help our industry progress. Tattoos can be something that brings joy to people. It’s not just about looking cool or being tough.”