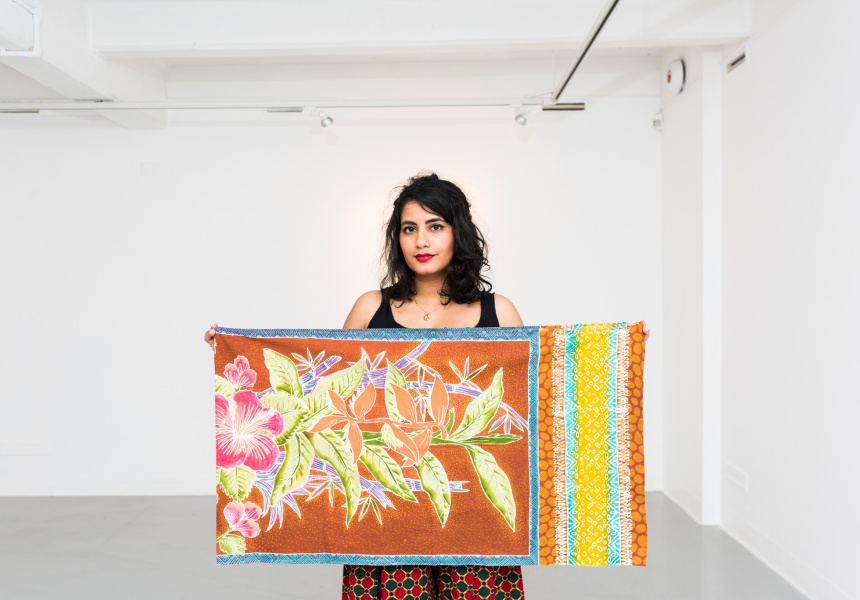 Haneen Martin migrated from Malaysia to Australia with her family in 2000. She was eight years old and mistakenly thought she was here for a holiday. Sixteen years later Martin is still often made to feel like a visitor. The artist and curator is drawing on these experiences and their ripple effects for her fourth solo exhibition, Patterns of Migration.

It’s the culmination of a summer at Nexus Arts Centre as the “Culturally and Linguistically Diverse” artist-in-residence. More broadly, it taps into Martin’s experiences as a Malay-Arab Muslim woman in Australia.

Broadsheet: It’s a timely subject. How long have you been working on this for?
Haneen Martin: I’ve had this general concept on my mind for a while now … but having the residency has allowed me to really focus on all of those things and be a little bit self-indulgent and really push those topics and make people feel a little bit uncomfortable. It’s really fun, whereas normally, if I’m just practicing as an artist, I have to strike a balance between what’s political and what can sell.

BS: How have your experiences inspired and influenced this exhibition?
HM: The whole concept behind the exhibition is to discuss migration; what it’s like, how it impacts you as a person. Also, what it has meant for me to be a Malay-Arab Muslim woman in Australia at this current point in time.

BS: What has that meant for you?
HM: Look, it’s not been all bad, but it’s really eye-opening to see how people react when really horrific things happen, particularly lately, and seeing how they react and how they absorb things … I often fly under the radar because I don’t cover my hair and I’m not overly religious, so seeing people’s true colours come out can be really confronting. There was a lot I ignored when I was younger, just from wanting to fit in and be liked and not be controversial or irritate people.

A lot of the strength I get from making this work now is kind of reclaiming all that embarrassment I had for so long. You know, I wouldn’t tell people I’m half Arabic even though it’s half my genetic makeup, and things like that. You learn how to be guarded in how you present yourself to people.

BS: So how does all of that play into the artwork?
HM: There are so many traditions in Malay culture. We’re not really religious but a lot of the Islamic culture is really ingrained into Malay culture these days. We continue to fast and we celebrate the Eid [al-Fitr], but they’re seen as something that brings people together rather than a specifically religious act.

For me, making objects with my hands makes me feel closer to the object that I’m making. So I could draw them and try to represent them in that way, but by making them I hope to invoke a strange sense of spirituality and that eerie feeling of liveliness in objects and a sense of ghosts and spirits.

I have a bunch of evil eyes that I made out of polymer clay. I have a few… I don’t know how to describe them – the word is Ketupat – it’s a woven [pouch] that you would traditionally make out of leaves and use to cook compressed rice. You can also make them out of ribbon for decorations. My mum and I have been making these. She’s been a huge influence.

I’m also doing embroidery – so there’s a strange mix of Anglo and Malay traditions. I’ve used that embroidery to display some of the results from a survey I put out on Facebook relating to how people see themselves and how people have been treated for being different culturally in Australia.

BS: What were some of the recurring stories you heard?
HM: The overwhelming themes were, if you weren’t born in Australia or are mixed race you’re definitely seen as everything but Australian … And that sense of disconnect with what it means to be Australian because you’re not white, which actually doesn’t make any sense. A lot of people offered up stories to me about being exoti-fied and othered, too.

BS: How do you feel sharing something so personal?
HM: Really nervous. I’ve never exhibited work quite so political before. That can be confronting for a lot of people. I hope people realise it’s been just as confronting for me to dredge everything up.

BS: If there were ever a time to be political in your work it’s now, right?
HM: That’s definitely how I feel. It’s sort of an ultimate sign of privilege to not feel anything about what’s happening in the world at the moment.

Patterns of Migration opens at Nexus Arts on February 9 and will run until March 18.