A night of art, food and wine with Mandy Nash and her live-installation exhibition, Muse. 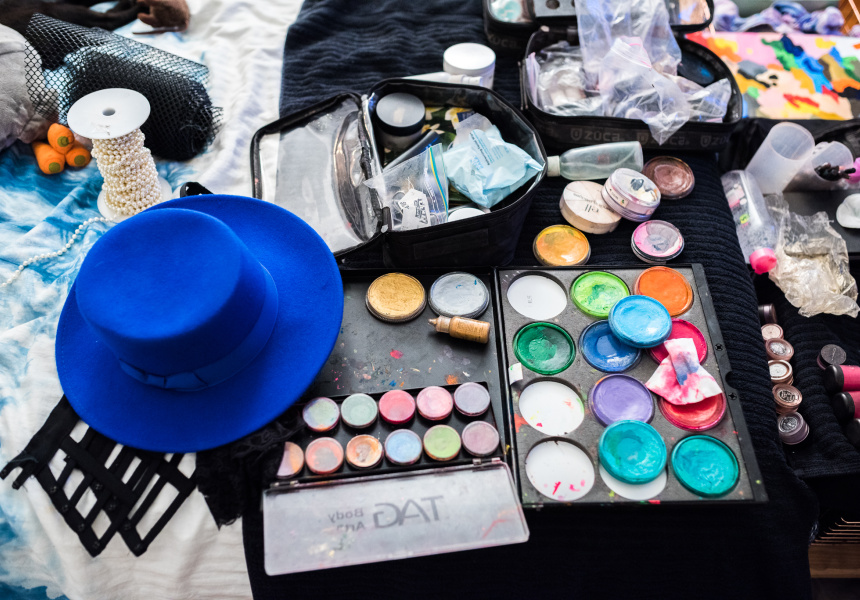 “Start with the eyes. Always.”

When Mandy Nash explains the art of make-up application it sounds easy. In reality, it’s anything but.

“The face is a canvas,” she says. “I break it down in my head and start from the top and work my way down.”

As she talks, Nash carefully applies pigment to model Georgia Buch’s face. She’s working around the clock to prepare for her solo exhibition Muse, which is held at Tenth and Gibson Studios on August 16. Guests can examine up close the models who become the live installation, while also gorging guiltlessly on preservative-free wines from Gentle Folk Winery and food from Seasonal Garden Cafe.

The exhibition is a showcase of Nash’s journey from imaginative make-up artist to full-blown creative wizard. It’s part of SALA (South Australian Living Artists Festival), and it’s a rare chance to see Nash and her brushes in action.

“When people ask what I do I say I use a fusion of make-up, face paint and fabrication to create a walking piece of art,” she says.

Nash has a big smile and bags of energy. She needs it, too. It takes hours to transform a face into a vibrant work of art. That’s why she works with models she genuinely gets along with. Like childhood mate Sarah Zaidel, whose face will appear in photographic portraits and who will herself appear with two other muses as part of next week’s exhibition.

“Two hours is a long time to be right up in someone’s face,” Nash says. “You want to be comfortable and you don’t want to be doing the ‘get to know you dance’ when you’re trying to pump out a piece of art. Sarah has been painted every colour and knows all about ear paint removal.”

Nash spends a lot of time Googling random animals for inspiration. “When I look at a picture of a cuttlefish I think about how I can translate the details to eye make-up,” she says. After sketching designs on paper, that’s exactly what she does, transforming models into feathered dinosaurs, moths, seahorses and octopuses. The result is a magical mix of make-up and costuming.

“For the feathered dinosaur scales I used Jacaranda pods I found when I was out on a walk,” she says. “I added wattle pods, feathers and a piece of fur.” Her moth piece was created using blue rhinestones for eyes, pipe cleaners and ostrich feathers.

“I tend to prefer focusing on the head, face and shoulders,” she says, explaining the difference between her craft and body art. She gives the example of Award-winning Adelaide body painter Emma Hack, who painted Kimbra and Gotye for the ‘Somebody That I Used to Know’ music video. Hack is a mentor, pal and inspiration to Nash. “Someone like Emma spends up to 18 hours working on a face and torso. I treat the face as the focus, the body is an addition.”

Since turning her back on a degree in Media and following the make-up path, Nash has painted it all, including baby bumps, zombies, ghouls and wedding-dress bodices. She even has a mermaid-themed bride on the horizon. Halloween is her peak period and she can often be found on movie sets, music video shoots and transforming performers during festival season.

Primping and preening Barry Humphries for Adelaide Cabaret Festival’s promotional material, and body-painting the iconic Grace Jones in Sydney for her Modulations tour, are career highlights. She also won the RAW Awards Adelaide Make-up Artist of the Year in 2014. The future is colourful.

“My dream is to work with my make-up idol, Alex Box,” she says. “And I’d love to paint Lady Gaga. She’d let me go next-level crazy.”