Bright, bonkers and gloriously weird. Welcome to the 2016 Adelaide Biennial of Australian Art. 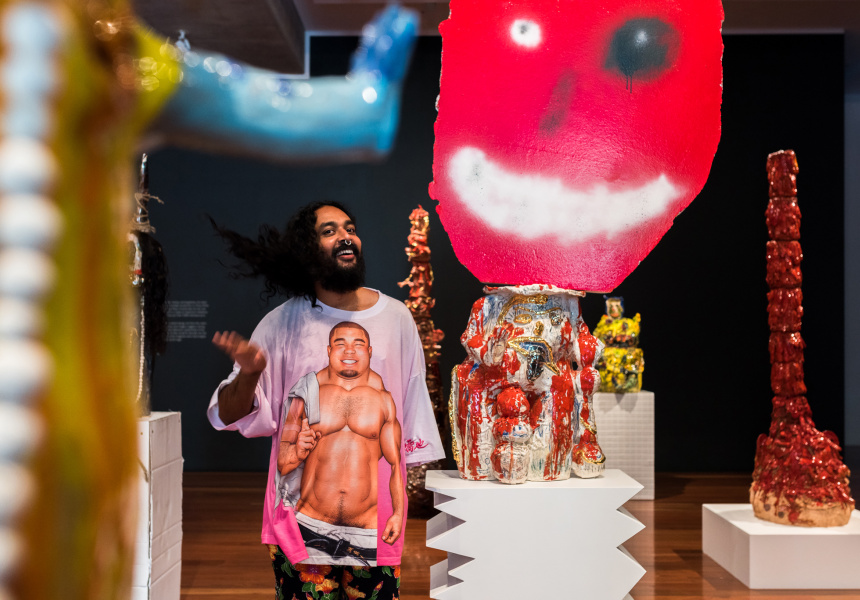 “There’s a famous saying that an artist’s art is always a self-portrait,” says Magic Object curator Lisa Slade. “One of the uncanny things that strikes me is the connection between artists and their work.”

She’s got a point. When artists jetted in to Adelaide for the launch of the 2016 Adelaide Biennial of Australian Art – this year titled Magic Object – there was no denying the similarity between makers and their pieces. One look at Abdul-Rahman Abdullah’s lifelike, hand-carved effigy in a canoe will have you seeing double.

Twenty-five artists from across Australia were invited to take part in the event, held across five venues in Adelaide. The theme was Wunderkammer – rooms or cabinets of wonder dedicated to the display of curios.

Slade spent years scouring the nation for talent. “It’s like 25 miniature exhibitions rolled in to one,” she says. The result is bright, bonkers and magical.

Most of the pieces are new and made specifically for the space, which the artists visited beforehand. “We negotiate exactly where they’ll be and they respond to that space,” says Slade. “It’s a very different way of curating and working.”

At 27, Sri Lankan-born Ramesh Mario Nithiyendran is the youngest. His earthenware sculptures and plinths are mind-bending stuff, created at home in Sydney.

The oldest participant is 105-year-old Aboriginal artist Loongkoonan, who began painting in her nineties and has since exhibited in the US. “The world is talking about Loongkoonan,” says Slade. “There’s also Gareth Sansom who is 76. There are artists here who are so experienced you can barely imagine, and other artists who are really just stepping into the light right now. I love that, that’s what it’s all about.”

“Taryn is unrepresented and this is her first major show,” says Slade. “She produced her work in a tiny space at the back of a café in Perth. What’s she’s made is phenomenal.”

It’s been an heartfelt journey for all involved. “The artists have not slept in the lead-up to this event. I’m surprised they stopped to breathe,” says Slade. “Non-artists don’t get it. It’s very emotional. They give up everything for this.”

Magic Object, The 2016 Adelaide Biennial of Australian Art runs until May 15 at The Art Gallery of South Australia, Anne & Gordon Samstag Museum of Art, JamFactory, Santos Museum of Economic Botany, and Carrick Hill. Entry is free.