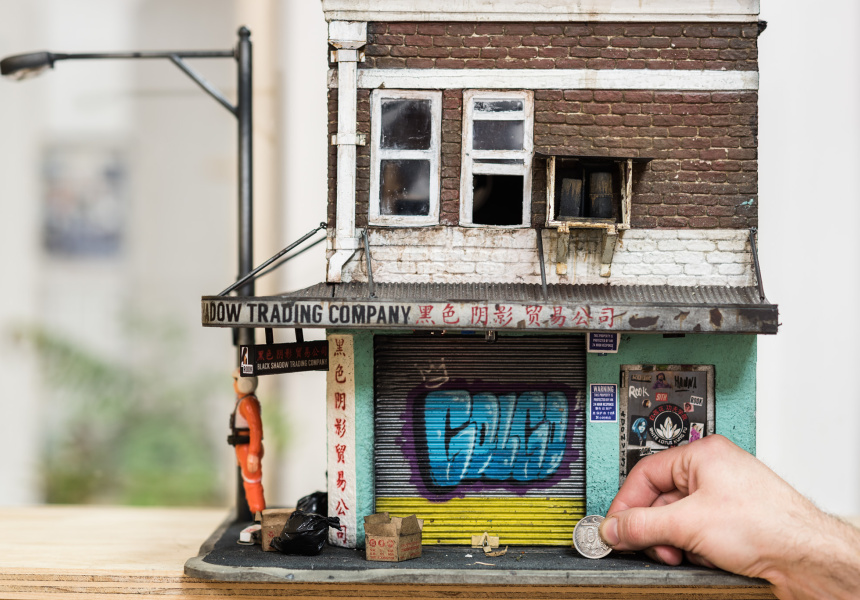 Joshua Smith’s parents recently bought him a magnifying glass because they’re afraid he’ll go blind. Their fear is justified. The Adelaide-based artist spends his days hunched over tiny replicas he makes based on rundown buildings.

He chooses structures with a touch of grunge.

“I love Chinatown buildings,” Smith says, pointing to a miniature version of a Sydney’s Black Shadow Trading Company building and another based on 12 Pell Street in New York City’s Chinatown. “They’re a bit grungy and are usually in all kinds of states of disrepair.”

Smith’s delicate handiwork can be seen in action during his stint as entrepreneur-in-residence at Norwood’s Brick+Mortar Creative until June 26.

His creations, made mostly from cardboard and plastic card, include miniscule waste bins, rubbish, abandoned bike frames, padlocks, air-conditioning units, discarded cigarettes and working interior and exterior lights. There’s even a little alarm system triggered by infrared sensor. “The brickwork is the inside lids of egg cartons,” he says. “They’re hand-cut and I glue down every single brick.”

His latest piece, a derelict shipping container based on one spotted at Hong Kong’s docklands, is due to head to an exhibition at that city’s Above Second Gallery. It features grotty tarpaulins, steel cables, wooden crates and a mini mural.

Smith started making miniature models a year ago, after growing sick of stickers and stencils – the mediums he favoured for 16 years. He hasn’t let those skills go to waste though. Each replica is covered with original stencils, stickers, graffiti and his street art aliases, as well as posters advertising fake movies gleaned from his imagination. Each one takes between a week and a month to make, “twelve hours solid a day.”

Smith eventually hopes to produce commissions for buildings across the country. “Not necessarily what they look like now but what they looked like originally,” he says. “If I can get enough historical photos I can make a miniature façade of the building as it looked 100 years ago.”

He particularly loves Melbourne’s urban decay and, ahead of an exhibition at Adelaide’s DEW during August, will construct a few interstate and local favourites. Locally, that will include Adelaide’s old Gerard and Goodman building down the alleyway next to Eckersley's Art & Craft on Frome Street. “It’s a building I’ve always loved. It’s beautifully, gloriously decaying and in a couple of years time won’t be there.”

The exhibition also features work previously exhibited in Melbourne and London. “Very few locals have seen them, other than in pictures.”

Joshua Smith’s Beauty of Decay exhibition is held at DEW, 101 Hindley Street, Adelaide, from August 4 to 18.