An Interactive Approach to Peace

This museum-wide exhibition at MOD asks if it’s possible to proactively and aggressively pursue peace. 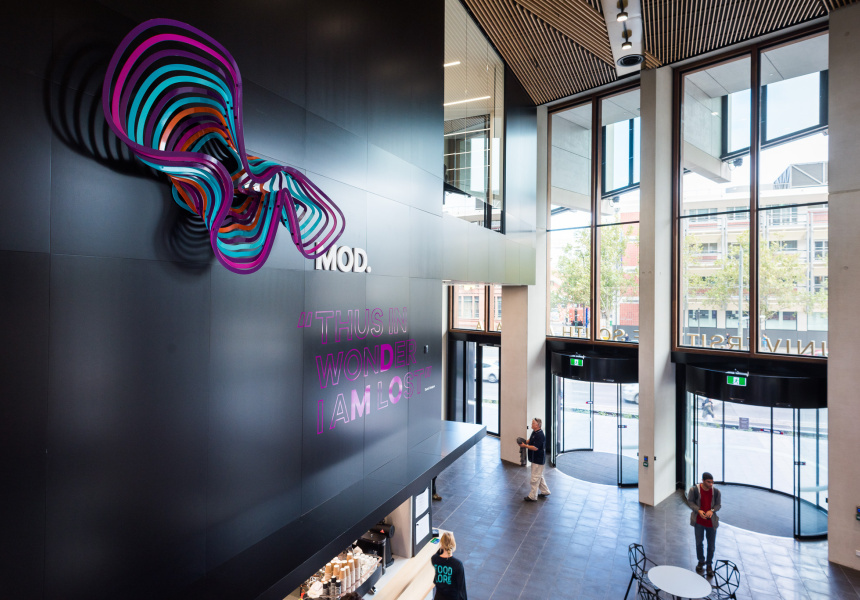 In the street gallery of The Museum of Discovery (MOD) on North Terrace, a multifaceted acrylic light sculpture hangs from the lofty ceiling. When you stand inside a triangle projected on the ground you can see an origami crane beaming with light.

This harmony of art, science and technology is used as a tool to shift perspectives in MOD’s second, museum-wide exhibition that spans seven galleries over two storeys. Waging Peace asks if it’s possible to proactively and aggressively pursue peace.

“We want to present not a polarised perception of peace, but one that is more nuanced,” says MOD director Kristin Alford. The exhibits are both comforting and confronting. In Trigger Warning – a seven-minute UK film – jarring clips of an increasingly angry world move rapidly to the sound of a softly spoken poem. It’s disturbing.

An exhibit down the hall may ease the tension. Sleep Ops zooms in on the importance of sleep in military operations. Dimly lit lycra sacks droop from the ceiling, forming “sleep pods” visitors can crawl into. Low-volume video interviews with sleep experts are projected onto the pods. One emits a rich aroma of coffee while talking through the impacts of caffeine on sleep. Visitors are invited to take a nap on a large, ottoman-like pod in the centre of the room.

They’re two key features of the exhibition, despite carrying very different messages. “I love Trigger Warning because it makes me feel awful every time I watch it and I love Sleep Ops for the opposite reason,” says Alford.

Local perspectives informed the exhibition’s approach. In collaboration with Uni SA’s Ehrenberg-Bass Institute for Marketing Science, the museum conducted a survey of what peace means to South Australians. The results are displayed in colourful infographics. “The meaning of peace varies from person to person,” one reads. “Peace is familiar, but not clear,” reads another. Screens show the work of more than 50 Uni SA students who were tasked with “rebranding peace”.

It’s not intended as a passive experience. Visitors are invited to play video games that challenge their perceptions of peace. Bad News Game, commissioned specifically for this exhibition, lets players build their own “fake news” empire. “Technology is designed with the intent of the designer,” says Alford. “The way we use it can still be flexible, but it doesn’t start with a neutral position – it starts with an intention.” At an exhibit called Augmented Relief, visitors don augmented-reality goggles to experience a virtual deployable field hospital after a natural disaster.

In keeping with MOD’s scientific mission, modern technology is at the heart of this exhibition. A large, rectangular touchscreen tells the story of the Kaurna (the Indigenous group whose traditional lands include the Adelaide Plains) season of Woltatti – the hot season between January and March. At one point, the globe at the centre of the Universal Gallery transforms into a map of worldwide Facebook connections as recently tracked by satellites. This meeting of old and new technology sheds light on communication and control.

“The variety of things we’re exploring through the exhibition is unexpected,” says Alford. She’s eager to unveil it to a young audience who she hopes will bring to it a sense of collective responsibility. “The world is changing too fast to rely on old ways of knowing.”

Waging Peace runs until April 2018. The launch party this Friday night will feature performances by Electric Fields, DyspOra and Elsy.