FRAN Fest: A Month-Long Celebration of Women in Art

More than 50 venues across the state will host exhibitions, events and talks by women artists. 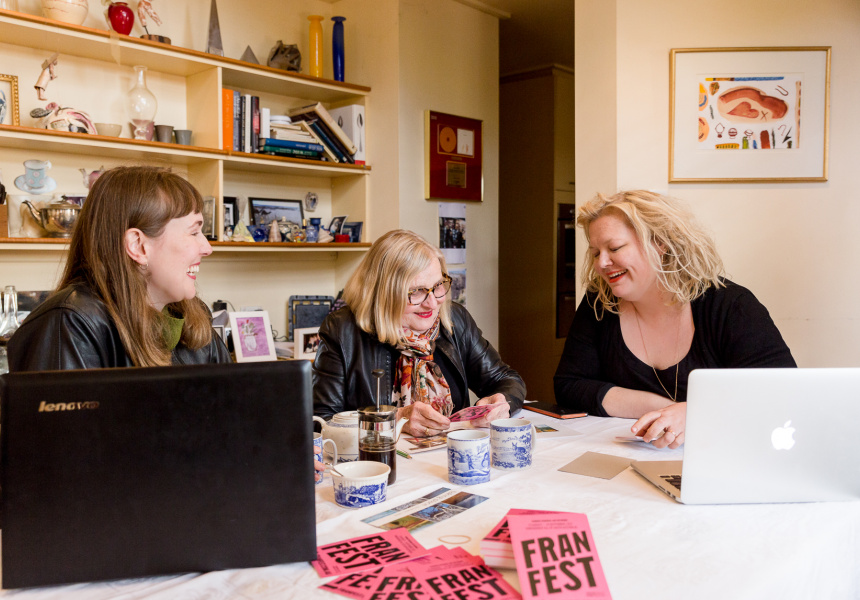 In 1977 Adelaide hosted The Women’s Show, Australia’s first nation-wide, open exhibition of women’s art. Forty years on, the Feminism Renewal Art Network (FRAN) commemorates The Women’s Show with FRAN Fest: a month-long festival to celebrate the achievements of women in the arts. From August 25 to September 24, more than 50 venues across South Australia will host exhibitions, events and symposia by female artists (transwomen and non-binary inclusive).

Visual artist, curator-educator and FRAN member Loene Furler was a part of the original Women’s Show of 1977. “It was exciting. But then, everything was pretty exciting in the ’70s!” she says, laughing. Furler will revisit her original work for FRAN Fest. Her exhibition included a painting of then-baby daughter Sia, who is now better known as an international pop icon.

A lot has changed since the ’70s, though many will concede progress for women hasn’t advanced at the speed we’d hoped. But The Women’s Show did achieve major strides for women in the arts. It secured ongoing funding for the Adelaide Women’s Art Movement while connecting and promoting women in the industry. Before then it was difficult for a woman to have an art show in Australia. It was a dynamic shift. “It gave women confidence,” says Furler. “[That] was the success of The Women’s Show.”

Academic, writer and curator Jude Adams is also on the FRAN committee, and she’s keenly aware of South Australia’s long and thriving art culture. “In the late ’70s and early ’80s, Adelaide was cutting edge. It was leading the field in arts and culture. We forget that,” she says. The Adelaide Women’s Art Movement formed in the 1970s. “It was very big. There were 50 [women] in the collective.”

Furler and Adams, along with Fontanelle gallery director Brigid Noone and Sister gallery co-director Mia van den Bos, form the curatorial team for FRAN Fest. When Noone curated Beyoncé is a Feminist at Fontanelle in 2013, she noticed a feminist revival among her peers. It was a “reclaiming of feminism” that inspired discussions and led to the formation of the FRAN collective.

Intersectionality and cross-generational representation is at its core. “It’s a multiple-layered, complex group of voices,” Noone says. “We wanted to make an effort to be inclusive, to be aware of how race intersects with gender, and how gender-non-conforming people [are represented],” Van den Bos adds. “It’s a festival for everyone.”

Search historical records of The Women’s Show and you’ll find little in the archives. Adams reflects on this fact. “It’s women’s history, which might not have been deemed important at the time. It’s [been] forgotten,” she says. “It was so active,” Noone adds. “When something is so lived, it doesn’t think of recording itself.”

While The Women’s Show had limited coverage in the history books, it’s been embedded in the culture of the Australian Women’s Art Movement for decades. Now, a revival puts FRAN Fest in a vital position. Noone knows the importance of teaching and celebrating the legacy of second-wave feminism in the arts. “[This major event] happened, and if people don’t talk about it, it will get lost.”

The cross-generational focus of FRAN Fest unites women in the arts and ensures that historical context is retained. For Noone, this is an important value of the festival. “[We are] attempting to celebrate and reconcile and challenge those differences of experience. Some works are discussing feminism, but all of them are promoting women’s art.

“We’re committed to having a contemporary conversation about the relevance of feminism now. Feminism is a philosophy that benefits everyone. It gives you strength to know that people were doing this 40 years ago.” She smiles and adds, “And, [it’s] a celebration.”

FRAN Fest opens on Saturday August 26 at 6pm at ACE Open. The FRAN Symposium will be held on September 16 and 17 at the Art Gallery of South Australia.