Inside Adelaide’s Futuristic Museum of Discovery

A two-level immersive gallery where art and science collide. 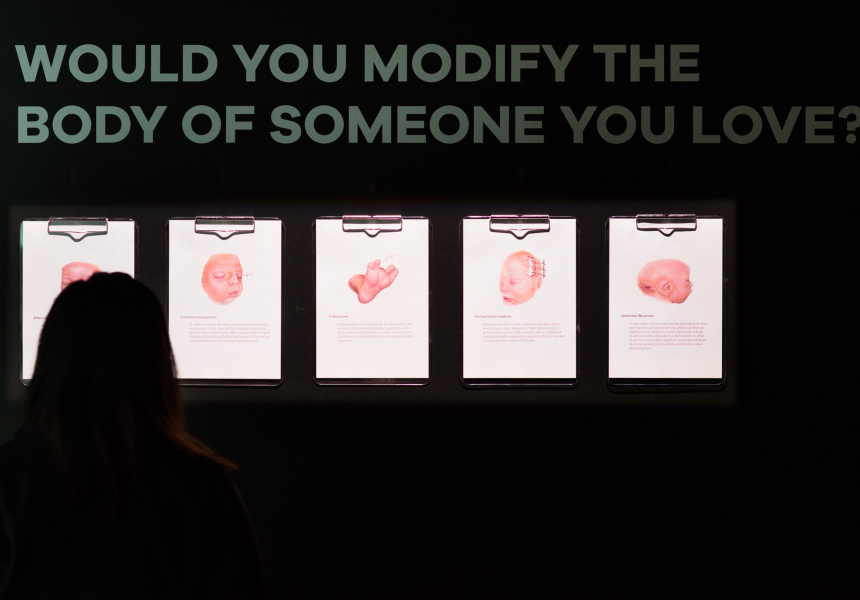 Five surgically modified silicon babies. An emotive teenage robot. A dizzying journey through space and a “gallery of pain”.

These are some of the arresting, challenging and sometimes uncomfortable creations you’ll find at MOD. The Museum of Discovery is the latest addition to North Terrace’s changing landscape.

The two-level, multi-gallery museum bridges art and science through the exploration of artificial worlds and augmented realities. It was inspired by Dublin’s popular Science Gallery, though “what we’ve ended up with isn’t like a science gallery,” says MOD director Kristin Alford. “We’ve got something a little bit different.”

The primary purpose of MOD is to engage young people – predominately 15 to 25 year olds – in science, technology and design. “Some of that is done through art and some is done through building interactive experiences, which is something you might be more likely to find in a science centre,” says Alford.

Blurring those lines is an immersive “gallery of pain” where visitors can complete interactive exercises to experience pain through “heat, cold and electric shock – without giving you an injury,” explains Alford. “We play with your perception of how much that hurts depending on the environment or task you’ve been asked to do."

Participants rate their pain from a casual “Thumbs up” to the less nice “Gah, make it stop” and dreaded “Call a priest”. “In some ways it’s a very artistic representation of the research and in some ways it’s a really practical, tangible experiment,” says Alford.

Most of the exhibits focus on health science (MOD is housed in UniSA’s Cancer Research Institute, after all) but they also cover astronomy, ecology, robotics and engineering.

In one gallery is Josh, a highly expressive animatronic modeled on a real-life Adelaide teenager, who muddies the line between human and machine.

Another exhibit features five silicon but eerily realistic newborn babies that have been “surgically modified” for a higher level of function – a kind of forced evolution. The five alterations attempt to solve looming medical, environmental and social-mobility issues in the babies’ future.

“My favourite,” begins Alford, “If you can have a favourite surgically modified silicon baby, is one where its toe has been removed so it’s more likely to contract hookworm, as a preventative for asthma.” Evidence shows hookworm infection acts as a defense against asthma, explains Alford.

“Another [baby] has a spare sphincter at the back of its head.” We’ll leave it there.

“They are disturbing but they ask good questions about bio-hacking, body modification, ethical considerations about changing the human body [and] the consequences of pollution and climate change,” says Alford.

The eatery, and the rest of the building, is accessible to everyone. “For me that’s really important,” says Alford. She’s hoping MOD, which has free entry, will open the door to young adults considering further study.

“If you’ve never been to university before they can be confusing and daunting places. Where as if you’ve been able to visit something like this regularly then perhaps the rest of university won’t seem so strange.”