Like the perfect mixtape, this couple’s work/life balance is the result of careful curation. 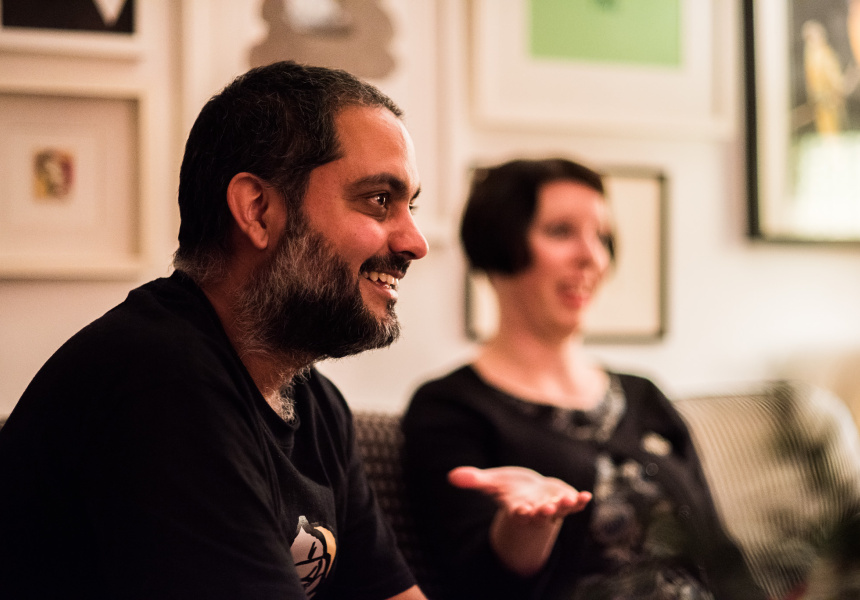 It’s like something you’d see in an indie flick. Julia Robinson and Roy Ananda met at art school, bonded over a classic childhood book and went on to make a life full of creativity.

“It was the art-school romance of the decade,” Ananda says with a smile. His wife rolls her eyes. It was, in fact, a slow burner.

They were studying at the Adelaide Central School of Arts (where they both now teach) when Ananda was astonished to learn that Robinson had never read Maurice Sendak’s Where the Wild Things Are.

“Roy said, ‘How can you exist without reading this book?’” Robinson recalls. “So he lent it to me. I reciprocated with, ‘Maybe you’d like this.’ And then we had this swapping thing for months.”

It wasn’t long before Ananda was making Robinson mixtapes, but they didn’t admit they were smitten until he’d graduated and was packing up his studio.

Robinson crafts narrative- and object-driven sculptural works inspired by folklore, myths, legends and biblical passages. Ananda mashes together notions of fandom and pop culture – what he calls “remix and sample culture” – and investigates how these intersect with contemporary art.

Their Payneham South apartment is a place of pleasure and indulgence. They’ve owned it for seven years. “That’s how long the bank’s owned it,” Robinson says. “The bank owns 80 per cent of this house, but the 20 per cent that we have is perfect. All my life, all I wanted was a house to play with.”

The interior is a deluge of art. The walls are covered in frames. Many were the result of swaps with fellow artists and past students. Robinson and Ananda often trade their own pieces (and sometimes small amounts of money) for works with which they have a particular affinity.

Curios, carvings and ornaments are dotted throughout their pad, from the bathroom to the kitchen. They cover every mantle, side-table and shelf. “We buy a lot of two-dimensional art,” Robinson says. “I’m really attracted to painting because I ,” (“we” Ananda interjects) can’t do it.”

As for Ananda: “I think I’m attracted to things that are a bit like something I would do.” he says, singling out a small piece by fellow Adelaide artist Tom Borgas.

Both have their favourite works. Robinson’s is a Hans Kreiner print purchased with her very first pay packet. Something in the green paper cut-out tweaked her sense of childhood nostalgia. “I just want to look at that thing,” she says. “I want to have it in my life and have it around me.”

Ananda settles on a portrait of himself. It’s a still from a video work by Tatsuo Miyajima (his hero when he was an undergraduate), entitled ‘Counter Voice in MILK – Adelaide Version’. In the lounge-room lamplight, his eyes gleam as he recounts working with Miyajima at the Contemporary Arts Centre of South Australia (CACSA) in 2005, where, according to his wife, “Roy lost his shit.”

A trio of mathematical puzzles Robinson purchased for Ananda sits on a large bookcase. Behind them, there’s a collection of pulp novels by HP Lovecraft. Below those, intriguing titles including Doré’s Dragons, Demons and Monsters.

“All of the stacks of books are generally current or touchstone research,” explains Robinson. “That’s how I run my studio as well – stuff all around me”.

Storage is an ongoing issue, so they added a new wing. A small studio tacked onto the north wall provides space for creating and warehousing work. “We've got a pig’s head in the freezer at the moment,” says Robinson.

Both artists also maintain private studios. Ananda’s is at Fontanelle in Bowden and Robinson leases space at Norwood’s Switchboard Studios. It’s a way to put physical distance between themselves and the distractions of home. “Making art – for all its pleasures – is also work,” says Robinson. “You have to be rigorous and diligent.”

Ananda agrees. “We’re still conditioned to think romantically about art – that it’s all about inspiration. But we’ve been teaching for 10 years and practicing for 15, and we know that's bullshit. But you still kind of want that because ‘I’m an artist!’”

Making a living as artists is challenging, eked together from grants, artwork sales and occasional prize money. Robinson recently won $5000 in the SALA 2016 Advertiser Contemporary Art Award, and teaches foundation studies and sculpture. Ananda teaches drawing and sculpture. Working with students informs the pairs’ ability to compose constructive critiques and be direct when thrashing out ideas together at home. “We discuss things heavily,” Ananda says. “And more honestly, probably, than anyone else we would talk to.”