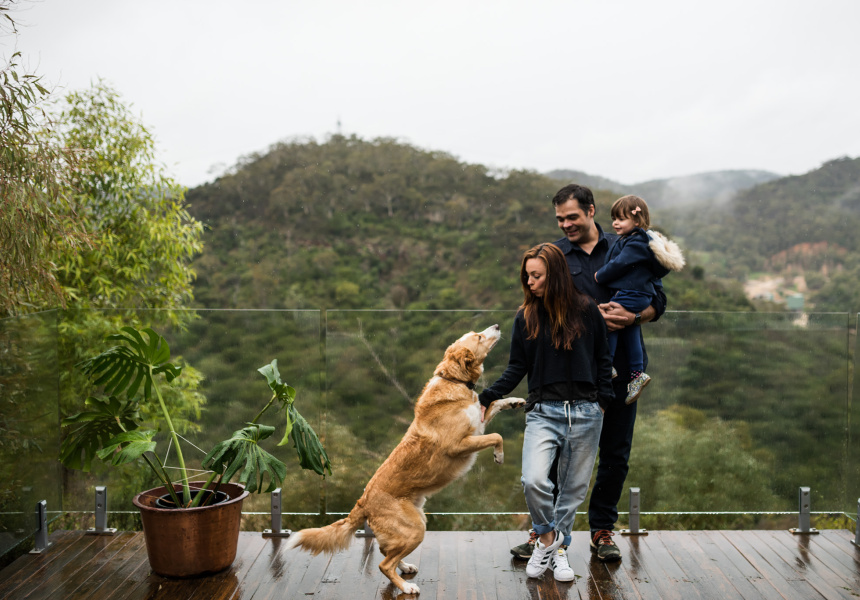 Views don’t get much better than the steep, Horsnell Gully hills visible from Simon Zappia and Lesley Williams’s living room.

The Adelaide-based couple fell in love with the house in Skye as soon as they clapped eyes on it.

“When we came to the opening [our reaction] was, ‘Yeah, we’re screwed’.” Zappia laughs. It was love at first sight. “It’s a Max Pritchard-designed house,” Zappia says. “This is only phase one.” The pair enlisted Jason Oaten-Hepworth and Ryan Genesin of Genesin Studio to tackle phase two. “I’d like to think we could do it ourselves, especially the interior, but we can’t make decisions.”

They’ve got the skills, just not the time. Zappia is the industrial designer responsible for the seating at SAHMRI (South Australian Health and Medical Research Institute) and Adelaide and Brisbane International airports. Williams is an industrial designer, graphic designer, singer and electronic music producer.

The duo runs commercial furniture business Aura Objects and works out of a Vitra and Unifor-packed showroom in West Hindmarsh. It’s where they spend most of their time, two-year-old daughter, Ella, in tow.

The couple digs furniture, but two new projects take up most of their energy. One is a super-powered bicycle light, the Indigo5, an idea that blossomed after Williams took a tumble during a ride in 2014. “We were riding at night and my light stopped working,” she says. “The bike clipped the edge of the curb and I went straight over and face-planted.”

Living in the steep, dark hills also inspired the product design. No street lighting meant a greater risk of crashing. “We wanted to develop a light that didn’t cost a squillion dollars,” Zappia says. “Something with a nice, big, broad beam, so you can see around bends as you’re descending Norton Summit.”

Zappia’s love of graphics and design began with an obsession over his father’s collection of stamps in the ’70s, particularly a series based on the Olympics. “I looked at some of those stamps and thought they were so cool,” he says. “Then an uncle who was a product developer said, ‘Why do 2D when you can do 3D? There’s so much more you can do with 3D.’ I thought, ‘Yeah, I’ll become a product designer’.”

The rest is history.

Their latest business, Botanica Boutique, is the one Williams is most proud of. Their little glass “mossariums” are made in Australia and bring the outdoors in. “It’s moss,” she smiles. “It’s about going and collecting things from the garden and watching it grow and change. I love them because of their simplicity and because Ella is involved, too.”

The idea blossomed eight months ago when Williams was messing about with terrariums, just for fun. “I don’t enjoy cooking, I don’t really enjoy gardening, but this seemed to gel with me. That’s how it started; making little vessels, tipping the glass upside down, assessing what was happening and thinking, ‘I think there’s a product in this’.”

Since the launch of their first design, Sanctuary, they now ship globally. “You can buy the moss from us, but it’s really about the experience,” Williams says. “It’s not about pillaging your national parks or anything like that. You collect a little bit of moss, drop it in, it grafts itself onto the marble and starts growing.”

The teardrop shape means that condensation gathers and every now and then, drops water onto the miniature garden. It’s ironic, given the family (and two boisterous dogs) essentially live in a glass house.

For Zappia the act of collecting greenery is a reminder of a childhood spent on his grandparents’ dairy farm. “There were creeks running through the property and at winter time we’d go out with my cousin and find the most lush, emerald-green piece of moss,” he says. “Simple things like that were so much fun.”

Their Aura showroom is fast filling with foliage. “It’s becoming more of a nursery/rainforest.” Zappia laughs. “It’s crazy, there’s all this moss everywhere.” Williams limits her musical ventures to her home studio, producing her own electronic music and K-Pop songs for international artists.

The pair insists parenthood was a blessing for creative time management. “If anything, it’s made me focus more on the things that are important,” Williams says. “She’s so flexible. She comes everywhere. When she was tiny she’d come to sound checks, I’d strap her onto my front.” Simon laughs. “She went to New York as hand luggage when she was three months old.”

It’s a busy life but they wouldn’t have it any other way. “I see it [creativity] as torment sometimes,” Williams says. “I want to do this and I want to do that.” She pauses. “I guess when you work for yourself you have your fingers in lots of different pies. Whatever is going you go with and tackle that. It’s like spinning plates, you’ve got to keep them all going until one really flies.”

Botanica has a pop-up store at Brick + Mortar Creative from August 20 to 28. Products are also stocked at Adelaide Flower House and East End Flower Market.