Meet the artist behind your favourite food, wine and coffee brands. 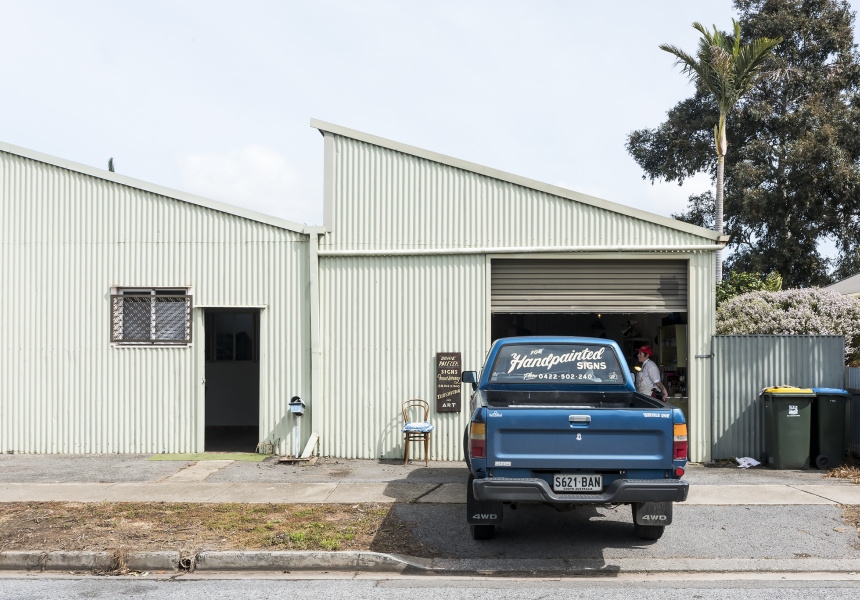 Bohie Palecek’s studio is a glimpse into a life on the go. An arsenal of artifacts, objects and souvenirs from her travels adorn the walls, desks and tables in her Croydon Park workspace. Just as Palecek is a multidisciplinary artist, sign writer and graphic designer, so too does her inspiration jump from pillar to post.

“This parchment is from New Mexico, this amazing old apple-picking bag is from a garage sale in New South Wales, and I collected these on a beach yesterday,” she says, pointing to some dried reeds.

These scraps and treasures will form works for a new group show, Of Land and Sea, opening this Friday at Peanut Gallery. The exhibition promises “grand maritime narratives” and “rolling landscapes”– themes that the wayfaring Palecek can very much relate to.

“The running themes throughout my work have always been courage and adventure and pioneering your own path, so that just tied in perfectly,” she says. “I’ll be looking at the courage that it takes to go out on your own and leave all the familiar behind; and how to navigate your way through that new territory, which has been a constant theme throughout the last few years.”

She’s not kidding. After growing up on the south coast of NSW, Palecek decamped to the States to pursue her art. “I was volunteering for most of it, with illustrators and screen printers, just trying to soak up as much knowledge as I can.” She passed through Portland and Philadelphia before settling in Austin to work as a sign-maker’s assistant.

After a year she upped stumps to Melbourne, before coming to Adelaide in 2013 for a three-month residency at Tooth and Nail. She soon decided to put down some roots here. “Adelaide is the first place I could do it full time and make a living out of it. I think Adelaide and South Australia is really interested in a quality product, and it reflects a lot of integrity.”

Adelaide residents would have to work hard to avoid Palecek’s work. She’s worked with some of our premier food and drink brands, such as Burger Theory, Mischief Brew, Hills Cider Co, East End Cellars, De Groot Coffee and the Adelaide Central Markets. Most recently she has worked on the Westfield Marion renovations as well as with Kangaroo Island’s Stoke Wines on a new label launching later in the year.

While she may have found a place to call home, we wager we can only keep this restless spirit for so long. “Since moving to Adelaide I’ve spent every second season away. I need to,” she says. “It’s about pushing further into the unknown and leaving the familiar. I just benefit so much from it.”

Wanderlust aside, Palecek’s motives are practical too. She works with a number of international clients, including UK clothing company We Do Nothing Collective and US lifestyle brand Electric California. “Some of my clients I’ve been working with for months, even a year, just over the internet, so going and meeting them and vibing off them is so important for me,” she says.

Luckily, the tools of her trade can come with her. “My mum was a sign painter… and she always said it’s a great way to assist your travels. You just have a sign kit and your brushes, and you can go anywhere in the world.”

Palecek’s family has played a significant role in her artistic pursuits. Both of her parents have worked as potters, a tactile trade that instilled in her a love of purposeful design. “I went through art school studying printmaking but dropped out to do a snowboarding season,” she says. “While I was there I found a real understanding of graphic design, and saw my work not so much on gallery walls but on skateboard decks and snowboards and T-shirts and that sort of thing.”

Now Palecek favours handpainting over computer-generation. Her designs are steeped in warmth, familiarity and nostalgia, and she places importance on storytelling and channeling her clients through her work. “With Stoke Wines I came to understand how important that story is, the concept. And the same with Mischief Brew, where I’m taking their personality and putting it onto their product, so it reflects them.”

With most of her days spent designing for others, Palecek says it can be “hard to come back to art and find myself and channel me. It can be daunting because you don’t have a brief or client or anyone to bounce off of. It’s super raw.”

Still, if there’s anyone happy to leave their comfort zone it’s her. Palecek has just returned from Hobart where she ran a sign-writing workshop for the Australian Graphic Design Association (AGDA). Following the Peanut Gallery exhibition she plans to travel to Sydney and Torquay. So how does she do it? “That’s what makes it work. That change is so refreshing and so rewarding.”

Of Land and Sea opens at Peanut Gallery on Friday, September 30 at 6pm.