The Adelaide artist paints kitsch, playful images of iconic food and drink, which will be on show at a new exhibition at Ensemble next month. 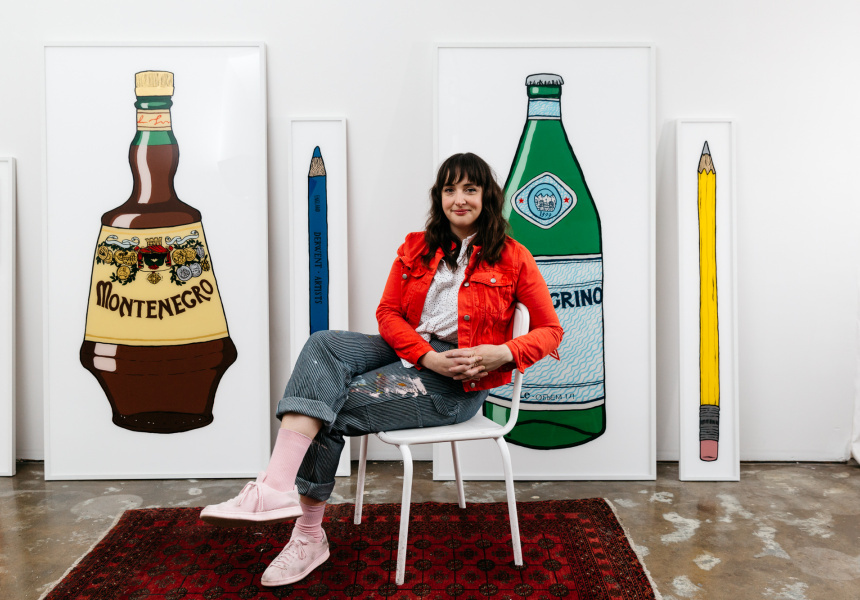 Take a glance at artist Billie Justice Thomson’s Instagram, and you’ll be sent on a vivid trip down memory lane. You’re likely to get a little hungry, too. The Adelaide artist specialises in painting food and drink – iconic items with sentimental value to her or those who’ve commissioned her – from bottles of Campari or McIlhenny Co tabasco sauce and a classic Bialetti machinetta to corner deli standards such as Chomps, Minties and Killer Pythons.

“I never intended to do it, to focus on it,” Thomson says of her fixation on food. “I just keep going back to it. I’ve been doing it since I started drawing, when I was four or five, and I never stopped. And sometimes I’d say, ‘Alright, move on to something else, time to change it up’, but then I’d come back to it. [Food] means so much to so many people, it’s kind of a never-ending source of joy and interest.”

It’s little wonder the separation of art and food doesn’t come easy: Thomson’s mum worked as a chef and Thomson herself works in hospitality (currently part-time at Lucia’s Fine Foods in the Central Market). Her designs have been splashed across shop windows and walls in Melbourne (she lived there for a stint before moving back home in 2016) and local spots such as The Simple Market in Mile End and Fringe-time pop-up Tiger Mountain.

Even her studio is connected to Gilles Street cafe Sibling. As we talk, the clamour of the Sibling kitchen provides backing noise, while coffees are slapped down on the desk in front of us. It’s clear her two passions are inextricable. “I have a big family of people, women mainly, who are really interested in food,” she adds. “I think, with most families, food is what brings them together.”

Thomson wants to recreate this sense of togetherness through her art: her nostalgic pop-style works are accessible, playful and a little bit kitschy – zooming in on everyday minutiae. Alongside the comestibles are images of other usually ordinary objects – oversized stationary such as Artline markers, rulers and pencils. She describes her illustrations as, “not exactly naïve, but like an intentionally loose style”.

“I often think about the word ‘approachable’. I really want to have a kind of approachable, wonky, illustrative style of painting … all done with a black outline, like a classic cartoon illustration,” she says. “Someone once said they look like stills of Bob’s Burgers, which was such a huge compliment. It’s maybe a bit more grown-up than The Simpsons, even though I definitely watched a lot of Simpsons and I think it’s gone into my drawing style, big time.”

Her bright, bold and colourful works are painted on clear perspex, rather than canvas, which Thomson says makes for a “super flat”, vivid colour. They also go against the traditional sizing of most artworks. Instead, Thomson uses tall and skinny backdrops for long drawings of baguettes and bottles of San Pellegrino or Kikkoman soy sauce. She’s also produced a series of human-sized works, initially created for her 2019 Melbourne exhibition Big Show at Modern Times Gallery. “I love painting big paintings, they have so much presence. The bigger they are the more personality they have,” she says.

Her next show Flavour Memories, which opens at Ensemble next month as part of SALA Festival, will feature a combination of sizes and shapes. “I’m being a bit nicer to myself this time,” she says, learning from the stress of holding an exhibition of only oversized paintings. “There’s less of a formula and I’m painting whatever I want to paint.”

She gestures to an image of a squiggly, snaking pencil. “I just want to have fun, and I also really want for children to see the work and connect with it. Because I think art often alienates children, and since I had a baby I paint with him in mind sometimes. Imagine being three and seeing a show with your parents and being able to get it on some level. So I really want kids to come and see this show.”

Flavour Memories opens at Ensemble on August 8 from 10am to 5pm. Due to new Covid-19 restrictions a maximum of 30 people is allowed in the gallery at one time.