The 26 drawings by artist Sam Wright, coming to Pirie Street’s In Studio and Cafe, take you on a journey through Adelaide’s streets and to some of his favourite cafes and restaurants (including a top laksa eatery). 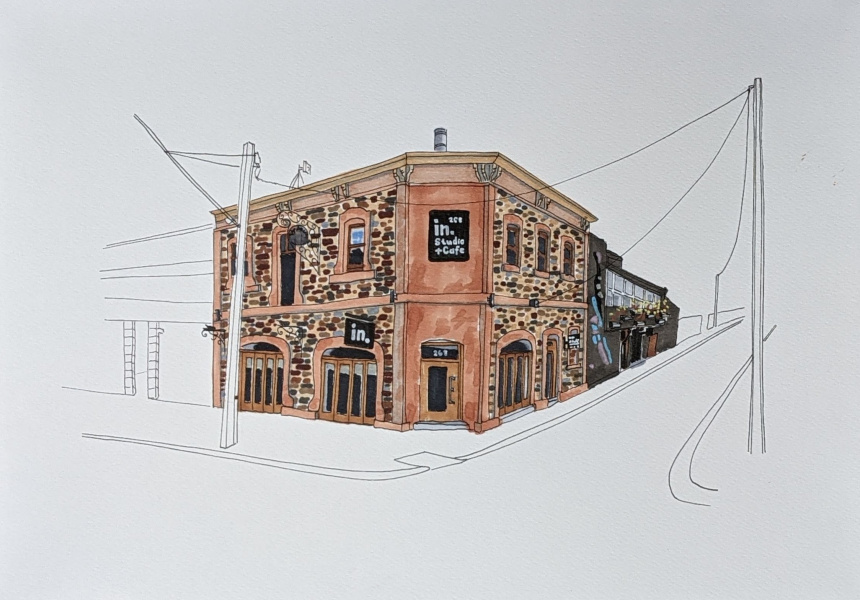 Sam Wright finds it difficult to think of himself as an artist. An events producer who picked up an interest in drawing at the start of 2020 after making a birthday card for his wife, he still feels somewhat new to the craft.

“I think the intention of the Instagram name Scribbles by Sam Wright is very much [telling of] my feeling that this is more just a means of expression,” Wright tells Broadsheet. “It’s funny, it feels weird thinking of myself as an artist.”

But it’s his newfound enthusiasm for creating art that makes his first exhibition, A to Z of Adelaide, so interesting. Not only does it depict instantly recognisable Adelaide locations, it shows how – through 26 pictures – a beginner artist can develop their technique. “The earliest works I did last year, they almost feel somewhat childlike to me,” says Wright. “I really wanted to demonstrate that in the exhibit … to kind of prove a point – it’s just more important to do this as a process for me, rather than everything being absolute perfection.”

The works in the collection vary in size and style, and are a mix of digital drawings and pieces created with Copic markers, Posca pens and pencils. He’s replicated landmarks, such as the Adelaide Central Market and Beehive Corner, as well as cafes, bars and restaurants including Pink Moon Saloon, Nano and Kutchi Deli Parwana. Wright scouted the locations and then worked from photographs to create the final drawings.

Most of the places are close to Wright’s heart, like Central Market eatery Asian Gourmet. His family has been going there since before he was born, and Wright (now in his thirties) eats there every Friday night with his wife. “It’s my favourite spot. It was the first one I did for the exhibition,” he says. “I feel you’re either all-in committed [to Asian Gourmet], or you’re more, like, a Lucia’s person instead … It makes the best laksa in town, hands down.” (He showed the finished drawing to the shop’s owners, Doreen and Charles Lo, and they were delighted.)

Others were chosen more for practical reasons. “[For the letter] X, I had to be a bit creative. I ended up doing Club X … That was probably a hard moment for me. I was like, I have no tie to or interest in this space whatsoever,” he says with a laugh. “And that’s an interesting outcome as well, to [realise that] it’s really important to me that I’m interested in the places I’m drawing.”

Inspired by artists like Phil Dean, Gerry Wedd and Reg Mombassa, Wright says he’s not looking for perfection. “Phil Dean makes a point, which I really love: if you want it perfect, take a photo … For me it’s more about, if the essence of the place is there, and you go ‘I know what that is, I know where that is’, then I feel really satisfied with the outcome.”

A to Z of Adelaide opens at In Studio and Cafe on Friday November 26, from 6.30pm.