Paintings inspired by bushfires, an installation built in isolation and a giant revolving door: the gallery’s next exhibition is a state-of-play of the SA arts scene – and more “2020” than even its curators thought possible. 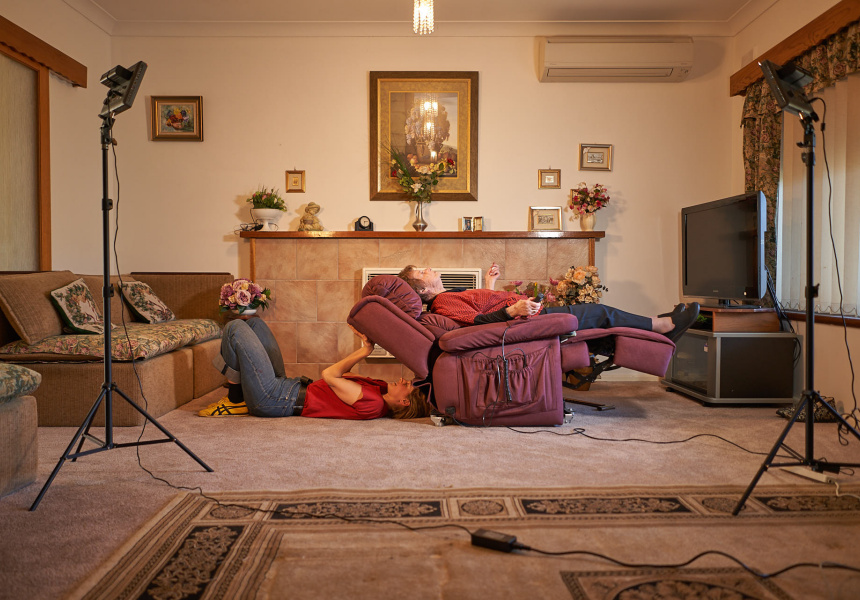 After a Covid-imposed digital sojourn, ACE Open is reopening its gallery space for its final exhibition of the year, If the future is to be worth anything: 2020 South Australian artist survey.

Co-curated by artistic director Patrice Sharkey and curator-in-residence Rayleen Forester, the survey features 10 local artists and collectives, including a work contributed by Fine Print magazine (co-created by Forester), which will involve a performance piece, digital commissions, and a “live issue” featuring artist responses to the exhibition.

As a founding member of longstanding artist-run gallery Feltspace, Forester is firmly entrenched in the local scene, while Sharkey moved to Adelaide from Melbourne 12 months ago. Together, they’re something of a dream curatorial team. “[Sharkey] came with fresh eyes, and my interest has been more localised,” Forester says.

The result is a “celebration of the breadth of artistic practice and critical work being created in South Australia in this moment”, she says.

In programming the survey, the pair embarked on a road trip taking in regional areas, suburbs and the city, connecting with artists in their studios. The artists invited to participate in the survey were those wanting to try something new, or develop an as-yet-unrealised project.

“There were a couple of conversations I had with artists who had a project in the works, or in the back of their heads, but didn’t have the technical resources or the finances or the scale, etc, to realise it,” says Sharkey. ACE provided funding as well as curatorial and technical support to help the artists take risks and complete their projects.

A highlight is Yusuf Hayat’s installation, which forms a sort of centre-point for the exhibition. “The work speaks to thresholds and the navigational pull of cultures and class, [and] a really important dialogue around cultural values and decolonisation,” Forester says. It took some savvy engineering and more than a few tests and trials to erect the sizeable work, which “involves revolving doors and a kind of audience-led installation”, according to Forester. “It’s up to the audience to position themselves within the work to fully embrace what he’s created.”

Artist Aida Azin is currently stuck in Victoria due to Covid restrictions and has engaged local collaborators to help realise her vision. Forester and Sharkey are in regular contact with Azin via email and video chat, but won’t lay eyes on the final work – which Sharkey is calling “a painterly sculptural installation” – until it arrives at the gallery.

Also featured is Kaurna/Narungga and Ngarrindjeri artist Carly Dodd, who will present a series of portraits combining photography and Aboriginal dot painting; photographer Emmaline Zanelli, who worked closely with her grandmother to create her first three-channel video work; Matt Huppatz, who has produced several large prints examining queer culture and language; and an impressive painting from Sandra Saunders, which reflects on the loss of wild birdlife in the recent bushfires. Sculptor Sundari Carmody and installation artist Kate Bohunnis are also presenting work.

ACE is also collaborating with arts organisation Tutti Arts to present a showcase-within-a-showcase, with six artists exhibiting work ranging from painting and drawing to sculpture and installation.

Given the diversity of the artists participating – and the fact that there was no thematic criteria for selection – what’s most interesting about the survey is not how different the works are, but how they overlap – and why. Forester herself was surprised to discover such consonance. Many of the works, she says, examine “how we imagine ourselves within particular forms and structures”, and draw on “the strength of creativity and vulnerability, and even survival” – themes that feel more relevant than ever.

“There are some very ‘activist’ perspectives, there’s some very technical [work] and beautiful craftsmanship, and there are things about minimal spaces and other worlds,” adds Sharkey. The artists are bound by a shared impulse to create works that represent “the way they want to see the world”.

While none of the works will display a sale price, ACE advocates for all its artists by facilitating networking, further programming and sales opportunities. “We do it in a specialised and individual way, depending on the project,” Forester says. “We found the right balance of people who are creating really intriguing work right now, and those we trusted with this commission to do something really incredible,” says Forester. “The intention is that – although it’s an SA survey – it’s outwardly looking for national interaction and dialogue.”

The exhibition will also include artist talks, workshops, and a closing party in December. Sharkey is excited to have people in the gallery again. “Within the context of Australia and the world, we feel very lucky that we get to reopen,” she says. “Having this surprise downtime, we’ve rediscovered how important our audience is in having that active, open public space.”

If the future is to be worth anything: 2020 South Australian artist survey runs from September 12 to December 12 at ACE Open.