The co-founder and current co-director reflect on how the humble artist-run gallery has maintained its relevance in an often-rickety scene. 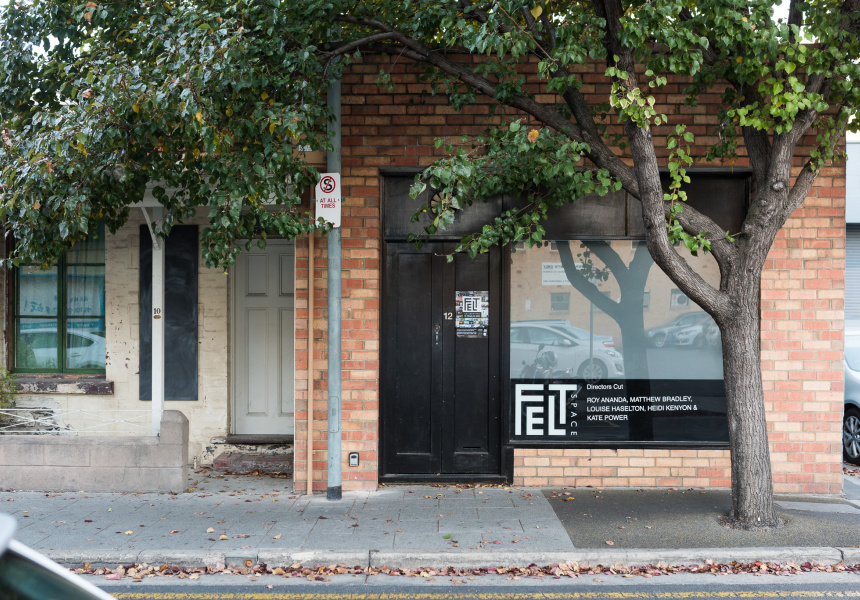 In 2018 FELTspace defies the odds. Still kicking in the same pokey digs on Compton Street, it’s recapping its greatest hits with Director’s Cut, showcasing a decade of exhibitions with work selected by directors past and present. Exhibiting artists include Roy Ananda, Kate Power, Louise Haselton, Heidi Kenyon and Matt Bradley. Ananda also has work in the 2018 Adelaide Biennial of Australian Art – one of this country’s most significant contemporary art platforms – at the Art Gallery of South Australia. If there was ever a nod to the value of small institutions fostering emerging artists and experimental practice this, surely, is it.

“I don’t think anyone starts an ARI thinking it’s going to last 10 years,” says current co-director Kurucz. They’re almost always operated by volunteers and kept afloat by modest, short-lived grants. Most perish when founders outgrow their commitments, or fatigue from keeping the faith overwhelms them.

FELTspace works on a slightly different model that sees regular transfusions of new blood sustain its momentum. Leadership is shared between five and 10 co-directors whose tenure is limited with most staying for a year, maybe two, and seldom more than three. This allows the organisation to consistently attract new audiences, stay agile, and evolve its methods. “Most of [the co-directors] have our own arts practice,” says Kurucz. “We all have jobs, some of us have kids, some of us have two jobs… [so] it helps to have lots of hands.”

While there’s no mission statement etched into the gallery walls, “We all try to stay true to the vision of FELT,” Kurucz says. There’s an agreed-upon mandate to “represent diverse viewpoints, emerging artists and experimental practice,” she says.

Board members share roles, playing to their individual strengths and contributing to decisions around programming and curation. “We’re not like a commercial gallery in that way, we’re more egalitarian.”

FELT took root in the vacuum left by the closure of Downtown – Adelaide’s first and, at the time, only ARI – in December of 2007. “A big gap was left between exhibition opportunities for graduates and a space that was going to cater for mid-career artists doing something more experimental,” says Forester. “That was a pretty clear directive for the original co-founders [and], in essence, has been one of the core values that’s kept FELT in business for so long.”

In the initial 12-month period, the focus was squarely on survival. “I distinctly remember [co-founder] Monte and I having an almost-argument about purchasing a cashbox, because we had so little money,” says Forester. “It was a chicken and egg argument; we needed a cashbox for when we got money, but we didn’t have money to spend to get the cashbox.”

“A great deal still rests on state funding,” she adds. “And it’s obvious that the state realises it’s a necessity for the visual arts community to sustain a diverse artistic output. The city needs it.”

A key date in Adelaide’s arts calendar is the annual FELT art auction, which always pulls in dollars. “A lot of it is artists buying art,” says Kurucz. It’s a reflection of the strength and quality of FELT’s activity that it continues to be regarded as an endearing, worthwhile and aspirational organisation by its community.

Forester describes her current relationship with FELT as that of “a long-distance admirer”. “I’ve always been impressed by the level of professionalism … particularly with the parallel events like the auction and FELTdark (an after-hours video exhibition),” she says. “[They are] something I’d always hoped the space would achieve, and knowing they’re doing it with funding is great. It’s very humbling … It’s what I always wanted to see, but I never thought it was achievable.”

Both Forester and Kurucz make special mention of a sense of camaraderie between FELT directors. “We are in an industry that expects us to work for free,” Forester says, acknowledging that this is not acceptable, but often accepted. “You have to volunteer, you have to gain skills. It’s a necessity … At FELT at least, there’s some recognition that you’re all in the same boat.”

For Kurucz, FELT’s enduring appeal stems from “the firm direction of the initial directors”. It could easily have crumbled with their gradual departure, but something about the initiative – its ethos and its purpose – continues to attract committed, dedicated personnel. “Stockholm syndrome is an ugly word,” Kurucz says, “but it does become part of your everyday life.”