Looking for a new way to de-stress? Hurling axes is now an option – with help from your very own “axepert”. The game itself is much like darts: face down the target and try to hit the bullseye. As I step into the old Coca-Cola factory to see the newest Maniax Axe Throwing venue in action, I’m greeted by a four-tonne tree with iPads attached to it. Displayed on the screens are waivers for guests to sign before throwing axes around. My eyes flash over the most alarming phrases: “waive my rights”, “physical or mental injury”, “result in harm”. I usually write about cafes – this was uncharted territory.

Thankfully, the expertise of Maniax co-owners Renee and Adam Schilling put my mind at ease. The pair fell in love with the sport several years ago in Canada, and have since opened Maniax venues in Sydney, Melbourne, Brisbane and Perth. The Adelaide location was about two years in the making.

“The red tape that’s involved in opening an axe-throwing venue in Australia is a bit more complicated,” says Adam. “There’s time involved in dealing with councils, dealing with the police, dealing with liquor, lots of back and forth … but the people are certainly keen and excited about it all.”

“It took us a while to find a site. It was the trickiest in Adelaide, out of any of the states,” adds Renee. “We found that landlords just didn’t really like the sound of people throwing axes around.”

They’re thrilled they found the location they did. Inside the 500-square-metre converted factory are large lanes for longer group sessions, and “quick chuck” lanes for shorter, come-and-try style experiences. Coaches, or “axeperts”, are assigned to each lane.

“We brought a number of axeperts from interstate to help train [the new staff],” says Renee. “We have really sporty people who are attracted to working with us, but then we also have big entertainers – they might be actors, dancers … what we really pride ourselves on in our venues is that we have people there who really entertain the group. It’s not just about, ‘This is how you throw an axe’. There’s a lot of banter.”

The game itself is much like darts: competitors face down a target and try to hit the bullseye. One of the axeperts, Jaryd, walks me through three different types of axe: an Estwing, a Prandi and a Maniax custom axe (one is large, one medium-sized and one tiny). Landing an axe on the target is deceptively tricky.

“The people who do really well are the ones that listen to what their coaches are asking them to do. You’ll get the guys who think, ‘I’m gonna be awesome ‘cause I’m really strong, and I’m gonna hurl it at the board’ – and sometimes they suck, because they’re trying too hard to smash it,” says Renee. “It’s actually about how you’re doing it: where you’re standing, shoulders, that sort of stuff.”

A condition on the venue’s liquor licence means you can’t drink until after putting down your axe for the night. But for post-throw celebrations (or commiserations), there are brews from Pirate Life, Young Henrys, Big Shed and Coopers. There’s also wine from Riot, and pizzas and platters from the kitchen. 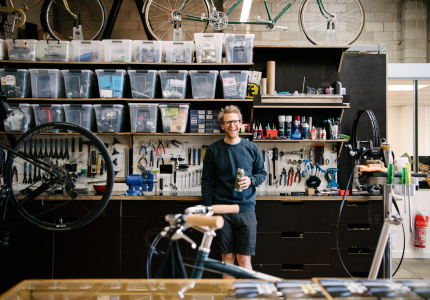